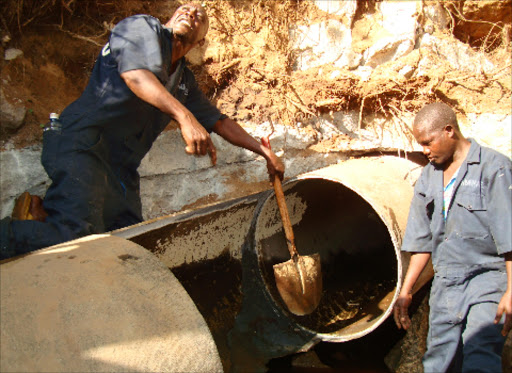 Coast water board officials working on a water pipe after pipe burst in May 3, 2012. Coast Water Service Board has announced a Sh50 billion expansion plan at the Mzizima Springs to boost water supply in the entire Coast region.

Coast Water Service Board has announced a Sh50 billion expansion plan at the Mzizima Springs to boost water supply in the entire Coast region.

Already the project's proposal has been drawn up and shall entail putting up a 240 kilometre pipeline from Mzima Intake to Changamwe.

two governments on the possibility of funding the project.

Chula said there have been concerted efforts to address water shortage at the Coast.

He said there has been a major over haul at Baricho Water Works that entailed replacement of water pumps and digging of eight wells to add to the existing four.

pipeline from Kakuyuni to Watamu increased water supply in Malindi and Mastangoni.

He said there is another project in progress that entails laying out a 40 kilometre long pipeline from Marere to Changamwe.

“The contractor is already on-site and the project is estimated to cost between Sh300 to Sh400 million,’’ he said.

Chula said the other project that CWSB has overseen is the Sh80.5 million

He said at the completion of the project, more

than 5,400 people from Kibokoni and Mtangani areas, which largely houses low income earners, were the beneficiaries.