He said the subsidised fertiliser and other inputs should be channeled to coffee unions which will in return distribute it to their farmers.

He called on the national and county governments to come up with a revolving fund that will help farmers to buy inputs cheaply. 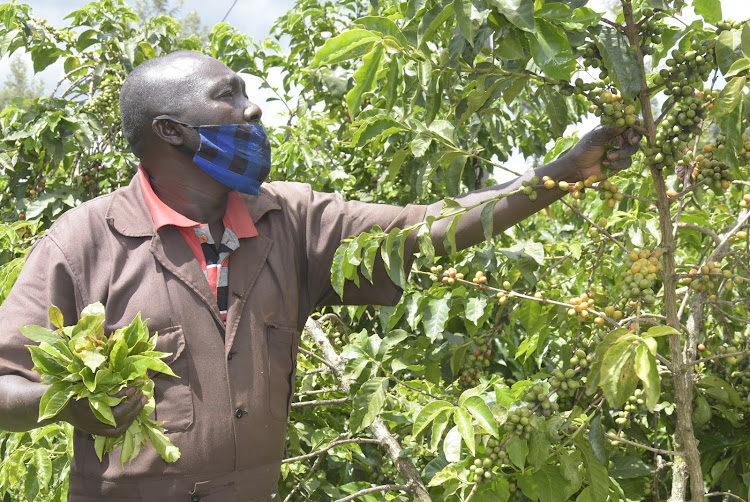 Coffee farmers have called on the government to help them increase production through provision of cheap fertiliser and other farm inputs.

“We have a lot of hopes with the new dispensation and this is the reason we are asking President William Ruto to come up with ways that will help us increase coffee production so that farmers can reap from their hard work,” Majau said.

He said the subsidised fertiliser and other inputs should be channeled to coffee unions which will in return distribute it to their farmers.

He called on the national and county governments to come up with a revolving fund that will help farmers to buy inputs cheaply.

He added, “We have been facing some challenges in the past but we are optimistic that these will be addressed by Ruto’s administration just as we expressed when he invited us for the county economic forum during the campaign period.”

The chairman also called on the President to allow implementation of 2019 regulations that were formed by a cooperative movement taskforce saying these will go a long way in transforming the coffee sector.

“The regulations are very friendly and will help farmers cater for their needs as well as selling of coffee directly to the market by elimination of brokers,” Majau said.

He noted that there were attempts to amend the regulations but they will oppose the move.

“We have already taken a petition to Parliament seeking to oppose any amendments after realising there were some clauses that were introduced through unprocedural ways,” Majau said adding that farmers should always be consulted whenever the government wants to introduce any regulations governing the coffee sector.

He also called on the President to fulfil his promise of creating an independent cooperative ministry to enable the Cabinet Secretary in charge to concentrate more on cooperative issues.

The union has succeeded in investing in various fields including real estate where they recently opened a mall that was constructed at the cost of Sh500 million.

Governor Nyoro says his administration is determined to revive the coffee sector and make it lucrative.
Counties
6 months ago

Move will see the coffee growers bypass brokers and intermediaries.
Counties
6 months ago

They will also be trained on grafting and growing high-yielding varieties to maximise profit
Counties
7 months ago
Post a comment
WATCH: The latest videos from the Star
by KNA
Central
26 September 2022 - 22:00
Read The E-Paper