•The locals brandished posters bearing Ruto's image and took to the streets to celebrate. 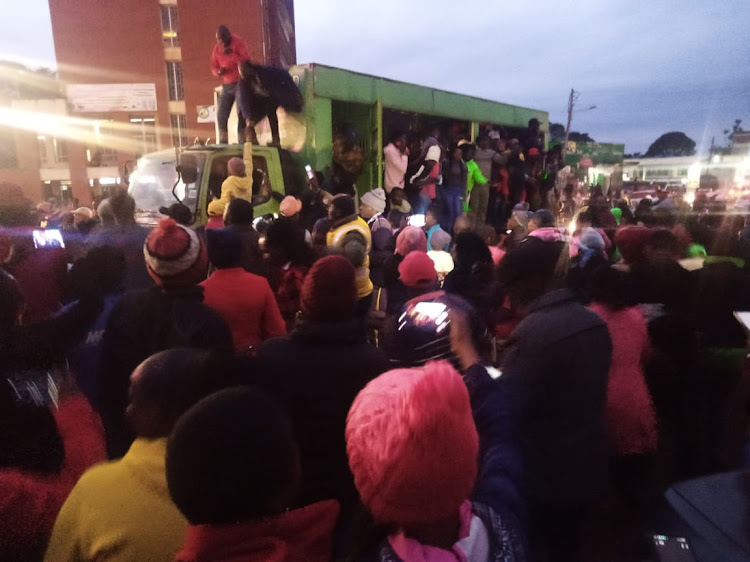 A celebratory mood engulfed Kirinyaga county towns for a better part of Monday evening after the declaration of William Ruto as President-elect.

Kerugoya town which is the county 's headquarter was brought to a stand still as locals burst in praise songs and dance.

The jubilant supporters paralyzed transport along the main Kerugoya- Kutus road as they matched to and from the nearby town celebrating.

The locals brandished posters bearing Ruto's image as they carried wheelbarrow, which is the party's symbol.

The celebrations spread to other towns and villages in the four constituencies namely Mwea, Ndia and Gichugu which is Azimio la Umoja-One Kenya coalition presidential running mate Martha Karua's home.

Before the declaration, the locals congregated in restaurants, bars and eateries as they followed the event live on local TV with bated breath.

Despite the sudden announcement by four of the commissioners who distanced themselves from the declared results, many were upbeat that their preferred candidate won fair and square.

Those who spoke to the Star exuded confidence in Ruto's administration as they challenged him to scale up his predecessors' achievements once he takes the leadership mantle.

Bedan Mwangi, one of the locals expressed his excitement over the declaration as he thanked the IEBC officials for a job well done.

He called on Ruto's opponents to concede defeat so that Kenyans could embark on national building after a grueling campaign season.

Daniel Karimi, another local, celebrated Ruto's victory terming it a product of a free and fair electoral process.

Karimi said he looked forward to a Ruto's administration that he said will improve the state of economy.

"We want Ruto to look into the affairs of the common mwananchi by lowering the high cost of living. Basic commodities are a tall order for some Kenyans and we want him to see to it that they are affordable to all Kenyans."

Another supporter called on Kenyans to cooperate with Ruto's administration as he called on his competitors to give him space and peace to deliver on his pledges.

In the wake of the celebration, a section of Azimio county leaders expressed their disappointment over the declaration.

Led by the coalition's Gichugu constituency chairperson Stephen Kaunda , the leaders said they are skeptical of what was announced.

"As an Azimio leaders I'm discontented with the outcome following the division of the commissioners."

Kano Ndumbi , Narc-Kenya county official equally expressed his reservation over Ruto's win as he called on the coalition to take legal actions.

"We are disappointed with that declaration and we think that if things don't go the right way, we shall take legal measures," he said.

Song and dance in Kisii as Ruto declared winner