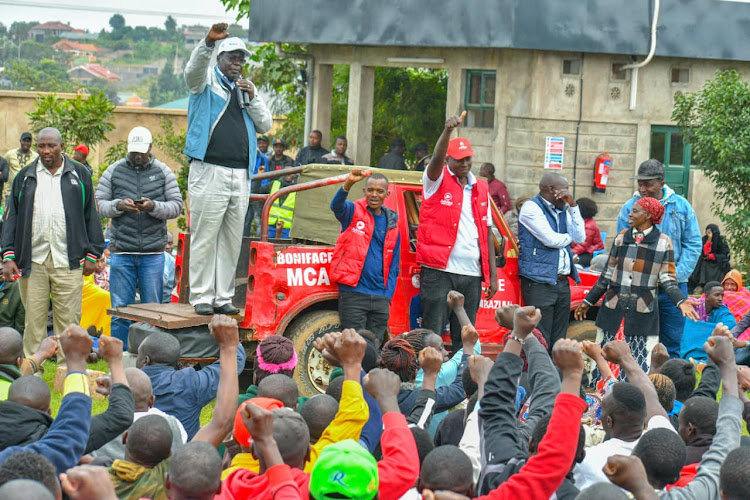 As the clock ticks towards next month's general election, Kiambu county governor hopefuls are jostling to win votes from the minority communities in the region.

Being a cosmopolitan county, Kiambu has more than 300,000 residents from other tribes living and working in tea, coffee plantations and factories in the region.

While addressing non-natives in Ruiru on Sunday, Kiambu Governor James Nyoro said members of the minority communities will be critical in determining who will win the governor's seat.

He exuded confidence that he will bag the most votes from the minority communities claiming many of them are Azimio supporters.

“These votes cannot be disregarded because they will play a key role in determining the leadership of this county in the next five years. I’m, however, optimistic that the votes will be in my basket because we are all in the same house, Azimio,” he said.

Nyoro said he has involved the minority communities in his administration by having some in his cabinet, subcounty and ward administration.

“Kiambu is home to many communities and that is why I involved them in the leadership of our county. They have played key roles in decision and policy making that have made our work easier,” Nyoro said.

The governor, who recently launched his manifesto anchored on health, agriculture, education, roads and infrastructure is also banking on his development projects in the two years he’s been in office.

He said despite his administration facing numerous challenges occasioned by the Covid-19 pandemic, he initiated and oversaw several projects, especially in the health department.

“We recently completed the 150-bed capacity Ruiru Level 4 Hospital which will be serving more than 500,000 residents. We are also putting up a Central Medical Store to ensure sufficient supply of medicines and medical equipment,” Nyoro said.

He also outlined other projects like tarmacking of more than 100 kilometres of roads and hundreds of kilometres improved to gravel standards.

“We have opened up many places by making roads better to improve transport. Now our people can do their business with ease and farmers can take their produce to markets without struggle. In our second term we will ensure we construct more roads,” the governor said.

Nyoro told the members of the minority communities to rally behind Azimio presidential candidate Raila Odinga, saying they are confident he will advance President Uhuru Kenyatta's legacy.

“We are supporting Baba because of his leadership qualities. We know he will slay the corruption dragon in this country and complete projects that were started by President Kenyatta,” Nyoro said.

George Ragaro, a resident said they are looking forward to getting a leader who will involve them in the county affairs and improve living standards.

“We also want our people to get jobs in the county government,” Ragaro said.

They are all fighting to win the most votes out of the 1.27 million votes in the county. They have heightened their campaigns across the county.

Nyoro set to launch a 6-pillar manifesto ahead of polls

He will focus on Health, Agriculture, Water, Education, Roads and support Infrastructure.
Counties
3 months ago

They suffering a lack of bursary, failure to secure employment and other privileges that locals get.
Counties
3 months ago