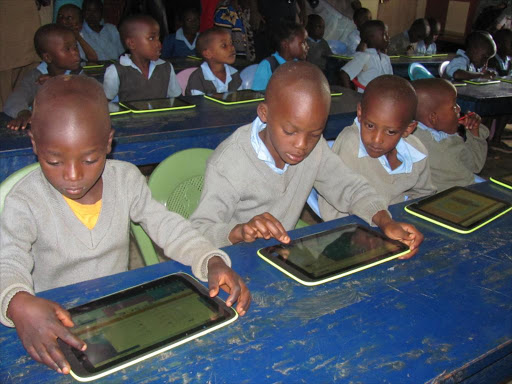 Pupils of Nyamecheo Primary school in Kenyenya sub-county try their computer knowledge during the launch of the digital literacy programme at the institution
Image: FILE

Kamburaini Primary School in Kieni, Nyeri, is the latest beneficiary of a fully equipped digital computer lab from three organisations.

The digital lab is fitted with 19 computers, a printer and WiFi to serve more than 250 learners to achieve digital literacy.

According to LRC president Abdi Dubat, the lab will be open to neighbouring schools and the public, who previously travelled 10 kilometres to access internet services.

Dubat said the computers would run on solar power inverters to ensure learning continues even in the absence of electricity.

He said the computers were already pre-installed with learning content for Grade 1 to Standard 8 pupils while the training of teachers will commence this week.

He also said the club had earmarked a total of 10 primary schools in Nairobi, Nyeri, Kilifi and Kakamega counties to benefit from the Digital Literacy Lab project this year.

The president said the aim of the labs was to make digital literacy accessible for learners from less privileged backgrounds especially those in schools yet to set up infrastructure for e-learning.

“The world is going digital and children in Kamburaini are going to compete in the same market for the same opportunities so they are expected to be digitally literate,” he said.

“Children who don't have the advantage of interacting with technology will be at a disadvantage, our objective is to bridge the gap by ensuring we provide digital labs to them."

Njihia Munyambo, a teacher at the school said that the lab would make it easy for learners to relate to some of the content being offered under the Competence-Based Curriculum.

He also said the lab would act as a source of encouragement for learners to take computer classes which were less popular due to the lack of IT facilities.

“CBC puts a lot of emphasis on developing competencies on digital skills. Previously we had to skip instructions that provided an online link due to lack of computers," Munyambo said.

"But now we are happy because, with these machines, learners will get an opportunity to access the learning material embedded in links."

According to the sponsorship arrangement, in addition to updating the curriculum, Computers for Schools and Semiconductor Technologies Limited will provide frequent maintenance of the desktops.

Semiconductor Technologies Limited director, Anthony Githinji, reassured teachers and the pupils that the content in the computers is safe.

He said that the lab would be operating on a closed system as a way of safeguarding the learners from accessing uncensored content online.

“We have put in place censorship measures and we do not anticipate that we will have any difficulties with the children accessing content that they shouldn’t see,” Githinji said.

If this proposal is adopted, selected teachers will offer their services in multiple schools
News
1 month ago

This will see the recently approved coding curriculum implemented in schools.
News
3 months ago

How aviation dreams are fostered at Nanyuki High