•Also, a road linking the two villages has been improved to gravel standards as the county administration seeks more funds to tarmac it.

•Kimani noted that the bridge, which passes through a swamp, has the capacity to hold huge weights and that it will boost transport in the area. 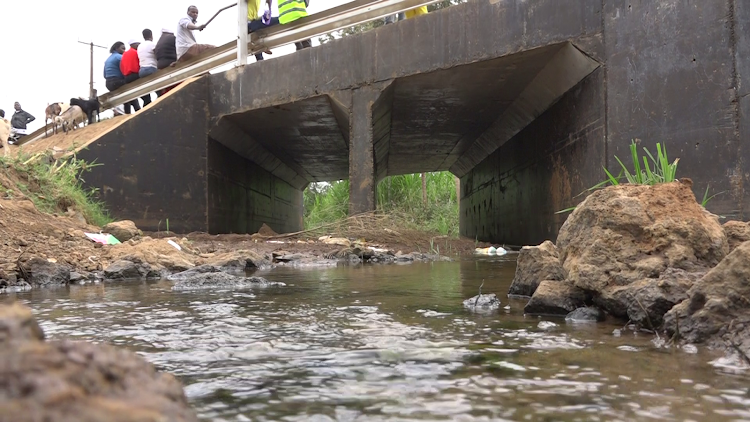 The Kiambu government has constructed a bridge linking Ngoingwa and Tola villages in Thika and Juja subcounties.

A road linking the two villages has also been improved to gravel standards as the county administration seeks more funds to tarmac it.

Thika Township MCA Andrew Kimani said traders in the two villages as well as those in the transport sector have suffered the most due to the derelict state of the bridge and the road linking the two villages.

He spoke while inspecting the bridge.

“This place has been impassable for years, especially during rainy seasons. Residents were forced to use long and winding routes to reach their destinations," Kimani said.

"The poor state of the bridge and the road have been a thorn in the flesh of residents for many years."

He said after intensive lobbying they got the funds to construct the bridge and improve the road.

Kimani said construction of the bridge is expected to spur growth in the region as more investors troop into the area due to ease of movement.

“In fact, land prices in these villages have tripled since the completion of this bridge about two weeks ago. A land parcel that was going for around Sh600,000 is now going for not less than Sh2 million. With such development, this region’s economy will grow immensely,” the MCA said.

Kimani said the bridge, which passes through a swamp, has the capacity to support huge weights and will boost transport in the area.

Residents praised the county government for addressing their plight, saying the development will facilitate business growth, improve agricultural activities and increase the value of their land.

“We have been suffering for long, especially during rainy seasons whereby this place was rendered impassable by floods. We couldn’t take our sick to hospital or even go to the markets. This project was a godsend and we are grateful,” resident Monica Nungari said.

Motorists, particularly public transport operators who were earlier forced to use longer routes, welcomed the development, saying it will greatly reduce operational costs.

“We have been counting losses in our business because hardly a week would pass without visiting a mechanic. We are thankful that our prayers were heard and we now expect our businesses to thrive,” matatu owner Moses Njoroge said.

It will ease movement of people and goods; residents will no longer live in fear of drowning during the rainy season
Counties
9 months ago
“WATCH: The latest videos from the Star”
by JOHN KAMAU Correspondent
Central
29 June 2022 - 23:00