They are suffering from lack of bursary, failure to secure employment and other privileges that locals get.

•Lagalo dismissed as propaganda that there was a debate to have Nyoro step down for former Kiambu Governor William Kabogo. 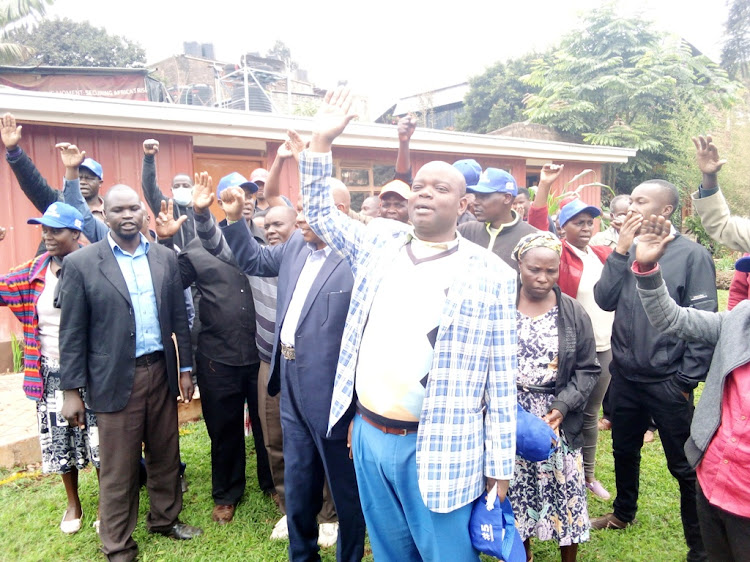 Different communities living in Kiambu have been asked to support the Azimio la Umoja One Kenya coalition to form the next government.

They said the ministry should then be devolved to county governments to address issues affecting Kenyans living away from their native counties.

KDG vice-chairman David Moreka said a lot of people are suffering from lack of bursaries, failure to secure employment and other privileges that locals get.

"A lot of people are suffering silently in nearly all counties. Getting a bursary is a problem. Once your name is noticed that you do not come from that county, your application is placed aside," he said.

"When jobs are advertised, you apply but first they consider those from that particular county before they turn to yours regardless of your qualification, even though the Constitution is clear that non-residents should take a certain percentage in county jobs," he said.

Moreka, who said the group is supporting Azimio's presidential candidate Raila Odinga, urged him to consider the issue once elected.

He spoke at Ruaka in Kiambu, where the group met with Raila's presidential campaign team from Kiambu.

A member of Raila's presidential campaign team Eric Lagalo said they are appealing to all non-residents to support Governor James Nyoro's election in August polls.

Lagalo said Nyoro has been supporting Raila since the formation of Azimio.

He said the Kiambu diaspora has more than 300,000 members who are registered voters.

He said the group was laying a strategy of reaching the non-residents to ensure they vote for Raila and Nyoro.

"We are appealing to all our members in the county to vote in for Raila, and also to all candidates vying for different seats using parties that support Azimio" he said.

Lagalo dismissed as propaganda that there was a debate to have Nyoro step down for former Kiambu Governor William Kabogo.

Post a comment
WATCH: The latest videos from the Star
by GEORGE MUGO Correspondent
Central
29 June 2022 - 23:00
Read The E-Paper