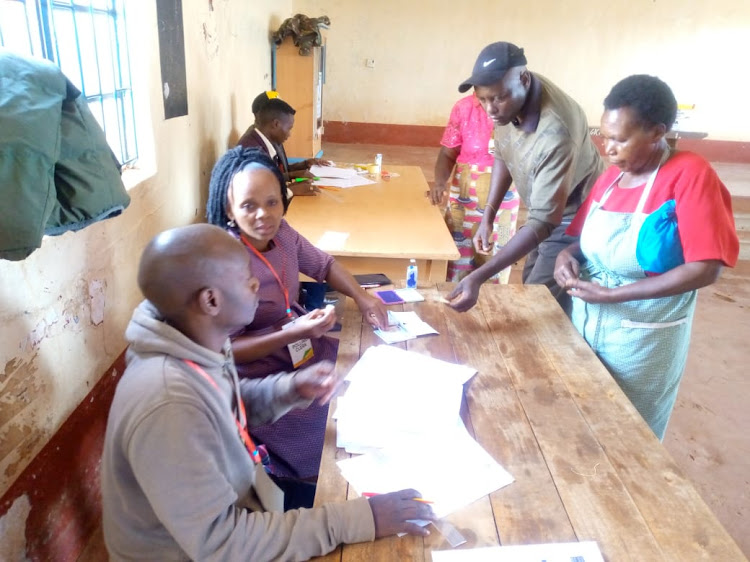 Only a handful of UDA supporters turned out to nominate their candidates in Murang'a.

A spot check in most polling stations revealed a low enthusiasm among residents, with only a few trickling in at a time.

Heavy rains experienced in most parts of the county on Thursday morning worsened the situation.

However agents said they were optimistic that the turn out would improve as the day progressed.

Some supporters also complained that their names were missing from the register and had been locked out of the exercise.

Alice Wangui was turned away at Mukuyu Social Hall polling station after her name missed from the register.

She said she registered as a voter last year during the mass voter registration exercise conducted by IEBC.

Wangui however said the register being used by the party seems outdated and that will lock out thousands of supporters willing to participate.

"I am asking the UDA party to intervene and ensure those who turn out are allowed to vote," she said.

Wangui said after her failed attempt, she resumed her daily activities.

She however said she fears she may also miss out on the general election.

Kiharu, Kandara and Maragua have only one contestant each.

Four candidates are battling it out for the party ticket in Mathioya. They include Stephen Macharia, Antony Maina, Gachau Mbuthia and Edwin Kimani.

In Kangema, the fight is between Johnson Mukuha and Peter Kihungi while in Kigumo, the contest is between Jospeh Munyoro and Murang'a assembly majority leader Eric Kamande.

Senator Irungu Kang'ata who is vying for governor and educationist Joe Nyutu who vying for senator have not been subjected to nominations as they have no rivals.

The low turn out has been attributed to the mass movement of leaders to smaller parties, with UDA and Jubilee parties being the main casualties.

No incidences of violence have been reported in Murang'a polling stations as voters appealed for peace.

Ruto has, however, assured UDA aspirants that the primaries will be free and fair.
News
7 months ago

UDA is also monitoring situations in Molo and Njoro constituencies in Nakuru.
News
7 months ago

He lauded the 5,000 UDA aspirants for their patience and for maintaining peace.
News
7 months ago