Completion of the bridge will trigger more infrastructural developments in the region. 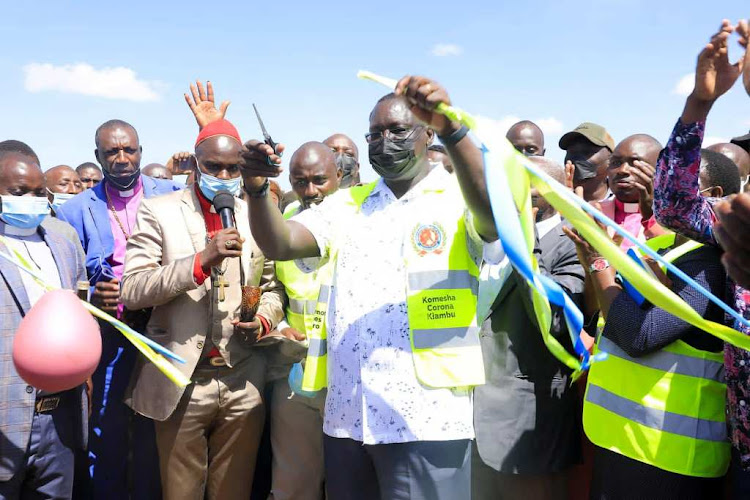 Residents of Biashara ward in Ruiru and Murera ward in Juja are all smiles after the Kiambu county government completed construction of a bridge linking the two wards.

According to Governor James Nyoro, the Sh14 million bridge constructed across Mukuyu River  will serve over 100,000 residents living in the two wards.

The county chief said that the bridge has a capacity to handle over four tons of weight.

He noted that opening is a big relief to residents who were previously using a makeshift wooden bridge to cross the river.

“Residents  of Mugutha and Murera area have suffered for decades because of this bridge. They were being forced to travel for many kilometers to access Ruiru town.  Now they will be using less than 15 minutes to get to and from Ruiru town," said Nyoro.

He observed that several people have died after falling into the river while using the makeshift bridge especially during the rainy seasons.

Nyoro said that the bridge apart from easing mobility and ending congestion, especially at Kimbo area, will go a long way in opening the two regions for investments and thereby spurring economic growth.

He also noted that the road linking Murera ward and the Ruiru-Githunguri road will be tarmacked to further improve mobility. The governor added that street lights will also be erected in the area to boost security.

“I sympathised with the people in this area when I first visited them and heard their plight. School-going children were trekking for long distances to school just because there was no proper bridge to shorten the distance. I have ensured that I have delivered this crucial bridge,” Nyoro said.

They said completion of the bridge will trigger more infrastructural developments in the region.

“This bridge will completely open our villages and actually as of now land prices have started to triple due to eased accessibility. We also expect investors to put up their ventures here  which will unlock job opportunities for us and our children. This project is indeed a shot-in-the-arm for us,” Wokabi said.

At the same time Governor Nyoro launched a programme to upgrade  Ruiru.

The upgrade will include tarmacking and expansion of link roads, construction of parking lots to handle over 250 vehicles and installation  of some 400 street lights to boost security and trade.

“Ruiru is a fast growing town and therefore we are committed to put up amenities which will promote investments in the region. Traffic congestion has been a thorn in the flesh for traders and residents and this will be a thing of the past once we complete the upgrade,” Nyoro said.

He noted that investors  are keen to invest in Ruiru due to its proximity to Nairobi, the population of over 600,000 residents and availability of crucial transport amenities like the Thika Superhighway and railway.

“This is why we are re-evaluating the town plan to ensure  that vital amenities are put up to attract more investors. The narrow roads are being expanded and the issue of lack of parking lots that frustrate traders is being sorted. Water issues are being addressed too,” Nyoro said.

Other major infrastructural development projects that have been undertaken in Ruiru  include construction of the 150-bed  capacity  Ruiru level Four Hospital where the county government is putting up its Central Medical Store.