•They said that over 60 leaders attended the Azimio la Umoja rally at Thika.

•Nyoro had promised that he would lobby people to support the Azimio la Umoja movement.

A section of members of the Kiambu county assembly dismissed rumours portrayed by a section of both mainstream and social media that they did not attend the Azimio la Umoja rally that was held at Thika last Saturday. 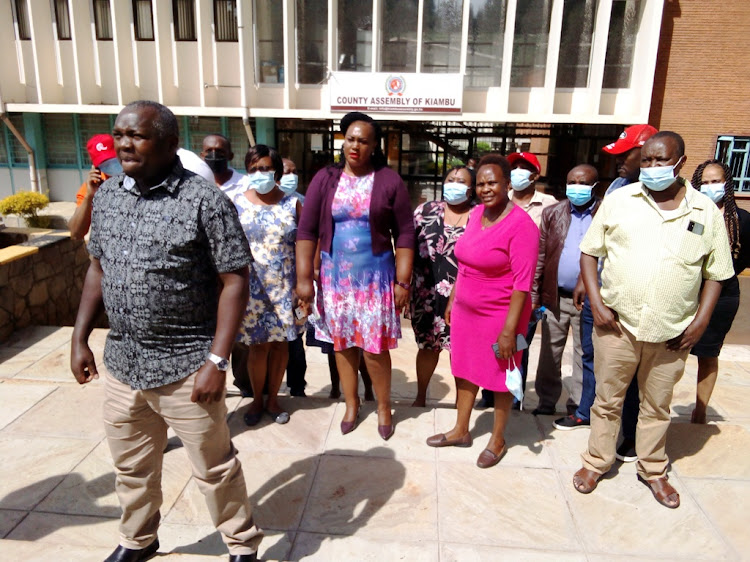 Limuru East MCA Ngigi Karuga speaking to journalists while accompanied by a section of MCA's who dimiissed allegations that the MCA's did not attend the Azimio la Umoja rally at Thika on Saturday.
Image: GEORGE MUGO

Some members of the Kiambu County Assembly have dismissed the claims that they did not attend Azimio la Umoja rally at Thika Stadium last Saturday.

The MCAs said that they attended the rally because they were eager to not only welcome ODM leader Raila Odinga but also hear what he had to say.

The agitated MCA's added that those spreading the rumours want to taint the good name of Governor James Nyoro by alleging that he is unable to control the MCAs.

Nyoro had promised that he would lobby people from President Uhuru Kenyatta's home county to support the Azimio la Umoja movement.

Speaking on Friday morning at their assembly, the MCAs accused a certain politician of spreading the rumours for the past week in a bid to cause a rift between MCAs, county officials, the public and the governor.

"These are cheap politics being spread by haters. Our governor is in full control of the assembly," Karuga said.

The MCAs said they had a good time listening to the Azimio la Umoja team's vision for the country.

"We wanted to hear what the team had for our people and the whole country, but we are shocked to learn that our haters were out to divide us," he said.

They also dismissed claims by a governor aspirant, whom they did not disclose his name, that he controlled over 50 MCAs in the county assembly.

"Why can't he call an assembly meeting and discuss issues? These are people who joke in a broad daylight, and it is unfortunate," Karuga said.

Wanjiku asked the aspirants to give peace and space to those already in office to finish their term.

"Our governor is busy working on county projects for the benefit of the residents of this county," she said.

The MCAs urged the youth to register as voters.

Nyoro: Mount Kenya will vote for Raila to last man

The governor said the region will not accept divisive leaders.
News
4 months ago

Nyoro reflects on historic relevance of Kiambu to national politics

The governor said Kiambu is significant in the country's political landscape.
News
4 months ago
by GEORGE MUGO Correspondent
Central
21 January 2022 - 12:04