TO FACE THE LAW

Manhunt launched for driver of vehicle stashed with bhang 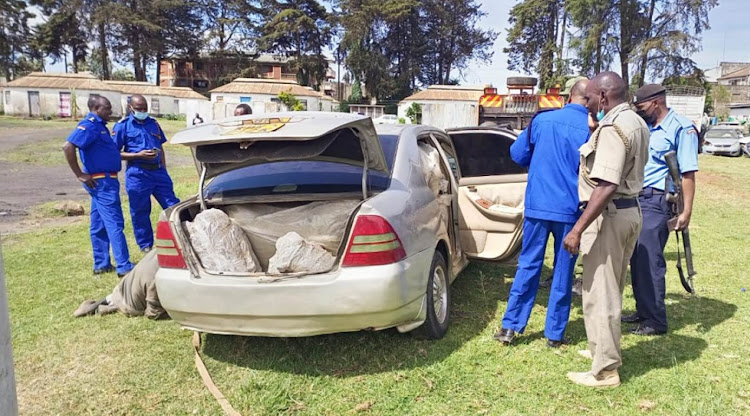 The car that was allegedly ferrying bhang after being towed at the Tigoni police station on Tuesday.
Image: GEORGE MUGO

Police in Limuru have launched a manhunt of a driver and his passenger who were transporting bhang stashed in bags.

The police said the suspects were transporting bhang from Western region to Nairobi on Tuesday morning.

However, when they arrived at Ha Githinji along the Mutarakwa-Kikuyu road in Limuru subcounty, the driver lost control at a sharp corner and the car overturned and landed in a ditch.

Drama ensued when residents came running to assist occupants trapped in the car, only for the crew to run away.

"The car was stashed with bhang in the boot and on the back seat. When we arrived to assist them, one of us was calling traffic police who were nearby," Simon Mburu, a witness, said.

"When the crew heard police being called, they hid themselves in the crowd that had gathered and later fled. The police discovered they were transporting bhang in bags," he added.

Police had a difficult time securing the scene as scores of people milled around the ditch.

The vehicle was towed to the Tigoni police station, where an investigation was launched.

Subcounty police commander Eileen Mola was not available for a comment.

However, a junior police officer said they were not sure about the street value of the bhang, saying that detectives will give further details after the investigations.