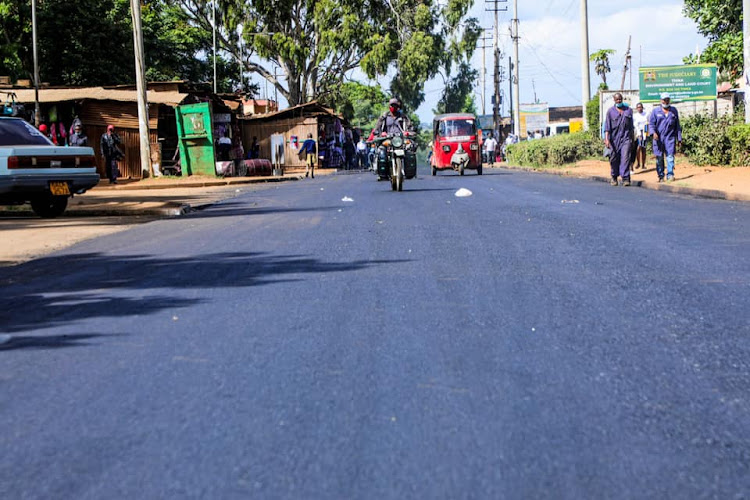 A section of Upper road in Thika town that has been recarpeted.
Image: John Kamau

Traders in Thika town have welcomed the National and County governments’ move to re-carpet roads within the CBD and its environs saying it was long overdue.

The traders led by Thika District Business Association (TDBA) Chairman Alfred Wanyoike said that the roads that have been in a deplorable state for a long time have affected business and slowed economic development within the town.

Wanyoike said that most customers were avoiding Thika town due to traffic snarl-ups occasion by the potholes-ridden roads and that they were losing millions due to the poor road infrastructure.

“The perennial traffic congestions within the CBD will now be a thing of the past. We are happy. Businesses will improve because customers who had relocated will now be able to access the town without traffic frustrations,” Wanyoike said.

Wanyoike spoke  when he joined Kiambu Governor James Nyoro at the official opening of the rehabilitated roads in Thika town.

One of the roads is the busy Kenyatta Highway that starts from Dr Wachira area to Destiny Church.

The road connects Thika’s industrial section with the CBD and is also plied by thousands of residents who reside in Makongeni, Kiganjo, Kamenu, Landless, Muguga, and Gatuanyaga areas.

Other roads being recarpeted are the Upper road and the Kenyatta Highway that extends from Bonjour roundabout to Joy Town special school.

The roads are part of Sh300 million projects carried out by the county government through the Kenya Urban Support Programme (KUSP).

Other projects include construction of a drainage system in Landless and upgrading to bituminous standards of Kilimambogo-Makutano and Muguga township access road in Ngoliba ward.

Nyoro who spoke during the event said that the county government will also install 200 street lights along the highway to boost security adding that construction of footpaths and drainage is underway.

“We are determined to ensure that all roads within Thika are in good shape and street lights installed to give the town a new look and boost businesses,” Nyoro said.

The National Government through the Kenya Urban Roads Authority (KURA) is also undertaking recarpeting of some 13 kilometres within the town and its environs.

Interways Works Ltd has been contracted to construct the roads at a cost of Sh700 million.

The project will also see walkways, street lights and a proper drainage system put up and will be a major boost for traders and investors in the industrial town.

During the  event, Governor Nyoro also unveiled a new fire truck that will combat inferno tragedies within Thika subcounty and its environs.

The initiative is dubbed 'keep left unless overtaking and I support safe driving'.
Counties
1 month ago
by JOHN KAMAU Correspondent
Central
10 January 2022 - 22:00