• Njenga maintained that the groups that received the money are in existence and that the relevant agencies should move quickly to arrest those found to have stolen from the public coffers. 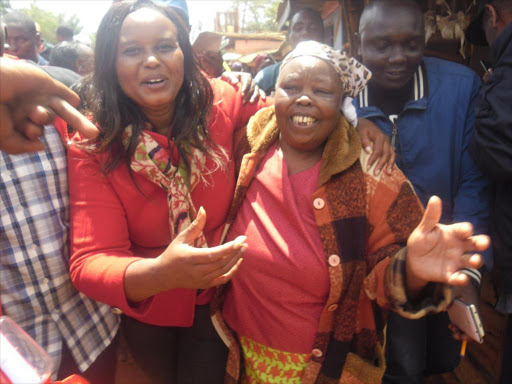 Gatundu North MP Wanjiku Kibe has called for investigations into the use of Uwezo Fund in the constituency, saying Sh13.7 million cannot be accounted for.

She said the cash could have been misappropriated as Gatundu North residents have not been receiving Uwezo Funds for the past four years.

The legislator said this is because the initial cash that was given to the groups in the constituency before she became MP, has not been repaid.

The lawmaker pointed an accusing finger at her predecessor Kigo Njenga and the committee that was mandated to manage the fund in the constituency.

She claimed the former lawmaker and his committee allocated the cash to ghost groups between 2013 and 2017. Kibe said out of the Sh16 million that was allocated to the constituency only Sh2.3 million was traced and repaid.

“For the last four years, the fund, which is a flagship programme for Vision 2030 aimed at enabling women, youth and persons with disability access finances to promote businesses, has not been reaching beneficiaries. Non-existent groups were used to plunder the money by the former regime,” Kibe said.

Kibe, who spoke after commissioning the rehabilitated Njathaini Primary School, said out of the 195 groups that received the funds under the leadership of Njenga, only 40 are in existence or have acknowledged having received money.

“We cannot disburse the remaining Sh2.3 million because we have not been able to meet the repayment threshold set by the Uwezo Fund National Committee,” she said.

Kibe said she will write to the Directorate of Criminal Investigations (DCI) and the Ethics and Anti-Corruption Commission (EACC) requesting a forensic audit of the fund in the constituency and prosecution of all individuals behind it.

“Those who were on the committee that oversaw the plundering of the money meant to assist Gatundu residents should be grilled and be forced to produce the ghost groups that they used to steal the money,” the MP said.

Kibe said she will also write to the National Uwezo Fund Board requesting it to treat and consider Gatundu North as a special case to allow the committee to disburse the repaid Sh2.3 million.

She said that while the repaid amount falls far below the stipulated threshold of repayment amount according to the board policy, Gatundu North groups have a right to access the funds for economic growth of their enterprises.

The MP also called on the groups that received the funds to repay the money so as to help others within the constituency who are in need of financial support.

In a rejoinder, former MP Njenga maintained that the groups that received the money are in existence and that the relevant agencies should move quickly to arrest those found to have stolen from the public coffers.

He accused the current leadership of Gatundu North of playing dirty politics with a serious matter and urged them to explain the fund’s situation claiming he was no longer in power.

“I call upon the incumbent MP to stop lying to Gatundu North residents. The groups that received the money are there and they are known. It’s her work and that of her committee to follow up with the groups and make sure they repay the money,” Njenga said.

He added, “I have never chaired the Uwezo Fund committee in Gatundu North. My work was oversight and create laws and policies in Parliament. However, if anyone will be found culpable for stealing the money, let them be arrested and prosecuted.”