DARES WAIGURU TO A DUEL

Ngirici: I am not tethered to UDA party like a goat

• The vocal critic of Waiguru said she is not afraid of political competition from the governor and is ready for a duel with her "anytime, anywhere"

• And in the worst case scenario should UDA ditch her, then she would jump ship as she is not "tethered to the party like a goat" 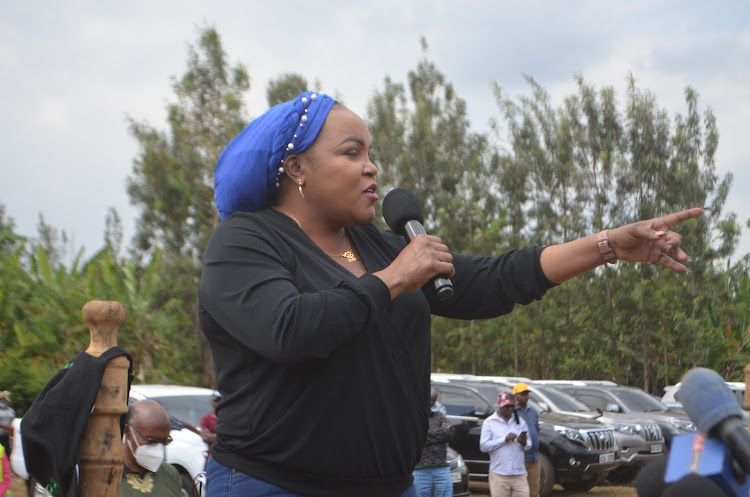 Kirinyaga Woman Representative Wangui Ngirici has dared Governor Anne Waiguru to join UDA to compete with her in the party nominations.

The MP has been a vocal critic of the governor and has declared interest in unseating Waiguru in next year's elections.

Ngirici said she is not afraid of political competition from the governor and is ready for a duel with Waiguru "anytime, anywhere".

“I am not afraid of any possible competition from Waiguru, who is still listening to what the ground is saying when we are already past that level,” Ngirici said on Monday in Ndia during a peace meeting.

The first-time MP said she knows what the ground looks like unlike Waiguru, who recently said she is consulting before making her next political move.

The statement was widely interpreted as laying ground to join the UDA bandwagon.

“I know how the ground looks like since I am always with the people unlike the governor, who is still listening to what the ground is saying before she decides on her next move,” Ngirichi said.

She, however, noted that should UDA ditch her, then she would jump ship as she is not "tethered to the party like a goat".

The lawmaker said she is ready to battle it out with Waiguru for the gubernatorial seat next year.

Ngirici said the position should only be contested by those who live with wananchi in the county and not by "day scholars who are never in touch with the reality on the ground".

Her husband, Andrew Ngirici, who accompanied her, said he was her number one supporter.

“Wangui is my wife and as her greatest political supporter, we are not relenting until she becomes the third governor of this great county,” he declared.

Interior PS Karanja Kibiko and his Infrastructure counterpart Mwangi Maringa attended the meeting where they promised to ensure peace prevails in the county for the good of the residents.

The two are walking a tightrope to avert fallouts in their strongholds.
News
3 weeks ago

No political drama during Mashujaa as Kirinyaga leaders announce ceasefire

County politicians say it will be a great privilege to host the national event.
Counties
1 month ago
by KNA
Central
13 October 2021 - 07:30