• Munya says presidential candidates can't be imposed on the region before an agreement is reached on what they will do for locals, if elected.

• Adds that talks between residents and aspirants should be conducted in a structured manner so that the agreement can be clear. 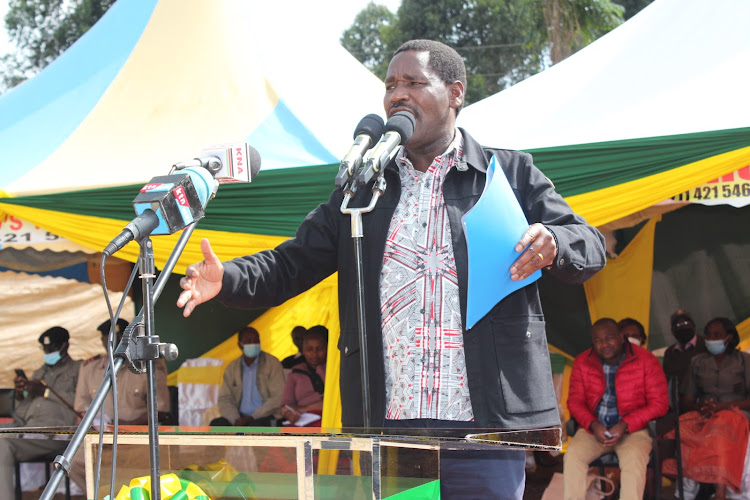 Agriculture Cabinet Secretary Peter Munya has said Mt Kenya region residents should agree on what they will gain from their support for any presidential aspirant.

Munya further said presidential candidates can't be imposed on the region before an agreement is reached on what they will do for locals if elected.

He added that talks between residents and aspirants should be conducted in a structured manner so that the agreement can be clear.

“We cannot just be told to support someone or that people are holding meetings somewhere. We want to know if you will shut the reforms we are doing in the agriculture sector as has happened in the years before.  We have not forgotten history,” he said.

The region has a right to advocate development as other regions and should be assured of it before deciding to back a candidate, Munya said.

The agreement should also be very clear that the region can back out should it be breached, the CS said.

“We need to know if we support someone, what will be our share. We need to consider the candidates critically and not allow anyone to divide us,” he added.

Munya said this at Githambo Tea Factory in Murang’a on Monday where he met tea farmers. The region has been receiving attention from aspirants gunning for its estimated six million votes.

Last week, members of the One Kenya Alliance met with Mt Kenya Foundation that is made up of business tycoons from the region.

The foundation, which is led by Equity Bank founder Peter Munga, is out to vet presidential candidates before it makes a decision on whom to back, reportedly on President Uhuru Kenyatta's instructions.

MKF met ODM leader Raila Odinga two weeks ago and is set to make an announcement on its preferred candidate soon.

Murang’a Governor Mwangi wa Iria, who has announced his interest in the presidency, has dismissed MKF, saying it has no influence on the region's politics.

Wa Iria said all candidates have the capability to seek votes without attending ‘interviews’ conducted by "a bunch of elders".

He added that the tycoons cannot purport to run the region like their private companies.

Governor questions why group is disregarding presidential aspirants from the region.
Counties
1 week ago