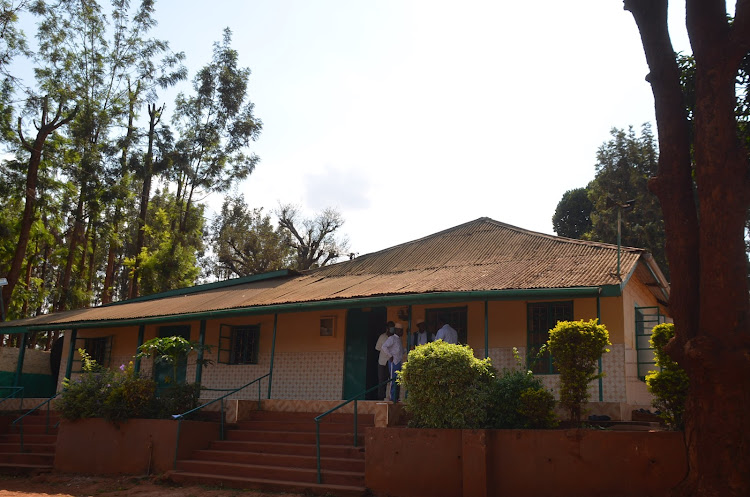 Mjini mosque in Murang'a town was built in 1900 by Arab traders. The National Museums of Kenya is conducting public participation to gazette the mosque, located in Kiharu, and an emergency colonial village in Kiambicho Forest, as national monuments.
Image: KNA

The National Museums of Kenya is conducting public participation on gazetting two historical monuments in Murang’a.

They are Mjini Mosque in Kiharu and an emergency colonial village in Kiambicho forest.

Mjini mosque is the oldest mosque in Central Kenya; it was built by Arab traders in 1900.

A colonial officer, Francis Hall, came to the area with about 300 people from the Coast who, together with Arab traders trading in ivory, built it.

The mosque is still used by the Muslim community in the Mjini informal settlement.

One of the elders at the mosque, 71-year-old, explained the importance of the Mjini mosque as a central part of the history of Islam in the interior parts of Kenya.

“This is the oldest mosque in the Kenyan interior, built in 1900," explained Shaban Gakure, 71, one of the elders at the mosque.

"From this mosque, the Muslim community has grown over the years and we now have over 200 mosques in Central region.”

His wish is that the history passed down the generations from would be properly documented for posterity.

“I know a lot of history, both religious and political, some was passed down from our elders who have since died and some of the events I have witnessed but it is all undocumented,” Gakure said.

In October 1952 the colonial government declared a state of emergency after the Mau Mau slew a local Kikuyu chief.

Fort Hall was built by Francis Hall in 1900. Hall built the fort, for shelter and security, on a hill in an area known as Mbiri. The town that developed around the fort became known as Fort Hall but was renamed Murang’a after Independence.

Two years later the colonialists built 800 colonial villages as a punitive strategy to contain, control and discipline Mau Mau women for their role in the struggle for independence.

One of those villages was built in Kiambicho Forest.

The emergency villages had spiked trenches around them, security watch trenches, bridges and single gates to restrict movement.

Anthony Maina, National Museums of Kenya assistant curator in charge of Murang’a county, said the NMK hopes to gazette a number of monuments and historical sites.

The purpose is to enhance knowledge, and foster appreciation and sustainable use of these resources.

“The government’s objective is to develop some form of cultural centres where people could come and learn more about their culture and heritage in Murang’a,” Maina said in his office.

He said the plans are well underway.

They are planning public participation forums so local communities are part of the process and to educate them on the importance of gazetting historical sites.

“Local residents are supposed to take the lead in protecting the natural and cultural heritage sites that offer visitors an opportunity to sample the county’s rich heritage both for education and leisure,” Maina said.

Fort Hall was built by Francis Hall in 1900.

Hall built the fort, for shelter and security, on a hill in an area known as Mbiri. The town that developed around the fort became known as Fort Hall but was renamed Murang’a after Independence.

Mukurwe wa Nyagathanga shrine is a significant landmark with spiritual and cultural significance among the Kikuyu.

Maina said the shrine attracts tourists curious about the history of the Kikuyu.

Kikuyu political elite uses the shrine to rally the community during elections.

Uhuru Gardens to be memorial park of history and heroes

President has visited the place more than 10 times which has made workers nervous.
News
3 months ago

Sad saga of the Murumbi legacy

Over 50 historical sites under threat from climate change, official warns