GETTING FROM THE SHADOW

To ensure the county did not plunge deeper into chaos, Kahiga retained all officials in Gakuru’s government

• When Gakuru died, Kahiga says it was at first heart-rending because he was wondering whether he would meet the people’s expectations

• Looking back, Kahiga believes he has succeeded in implementing Gakuru’s vision 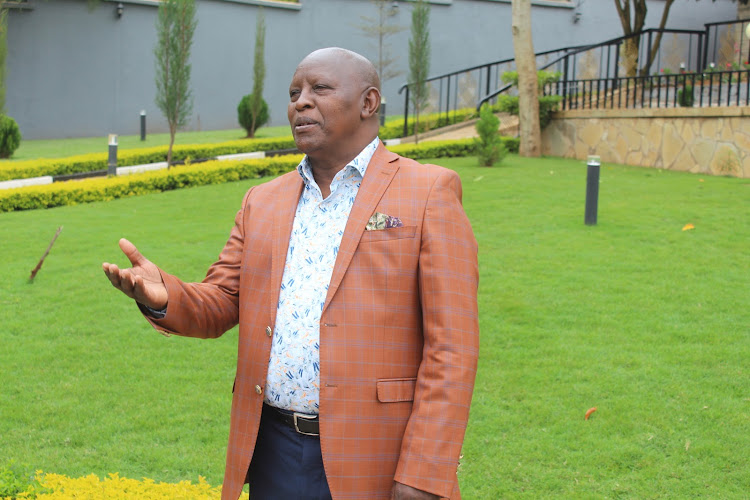 Even as they battled in the 2017 General Election for the Nyeri county top seats, it had not occurred to Edward Mutahi Kahiga, 61, he would be governor.

This is because before being picked as Wahome Gakuru’s running mate, Kahiga would appear in public forums and to voters' surprise, he would announce he was running for the deputy governor post and was looking for a running mate.

But as fate would have it, he was sworn in only three months after the election to succeed Gakuru, who died in a road crash on November 7, 2017.

“When his death came, it was a shocker and I was grossly unprepared. But I quickly got into the system and made sure Nyeri was steady and we moved on very well,” Governor Kahiga told the Star in an interview in Nyeri on Wednesday.

Undoubtedly, the people of Nyeri had great hopes and confidence in Governor Gakuru, receiving 284,791 votes (72 per cent) and with it a huge responsibility for Kahiga .

The biggest challenge was trying to work with people whom I had not selected. But looking back four years down the line, I think we have done well. There have been ups and downs but here we are

He says the hopes were shattered and the sudden death left residents confused, considering they had lost the first governor, Nderitu Gachagua, the same year.

"There was uncertainty and everybody was worried and then, here their choice has just been taken away. They were apprehensive and very concerned," Kahiga, a former  primary teacher, said.

But to ensure the county did not plunge deeper into uncertainty, Kahiga retained all officials in Gakuru’s government.

“The biggest challenge was working with people I had not selected. But looking back four years down the line, I think we have done well. There have been ups and downs but here we are.”

There was also the challenge of meeting the people's expectations.

“They didn’t give me time because in less than a month, they were outside my office singing Kahora Mwalimu Niwoka Muno (slow down teacher, this is too much),” he narrates.

This was a song by the late Kikuyu benga musician Joseph Kamaru of a pupil admonishing her married teacher, who was trying to lure her into a sexual relationship.

But that was not the case with Kahiga.

It was the Roads executive, Muthui Kariuki, who, without consulting, notified hawkers to vacate Nyeri town streets to pave way for the upgrading of the roads. It triggered demos.

Anything Kahiga did was criticised because of the people’s mentality towards a primary school teacher. They felt he could not take them anywhere. It was up to him to prove them wrong.

He was not among the popular, influential political bigwigs anyway.

Kahiga was born at Gitathi-ini, a colonial village in Nyeri town, before his family moved to Kiganjo Police College in 1962, where his father worked as a waiter.

He started his education at Kiganjo Primary School in 1965 and moved to  St Mary’s High School in Nyeri town between 1973-76, where he sat his East Africa Certificate of Education.

“I graduated in 1980 and was posted to Baringo Central where I taught for six years before coming back to Nyeri,” he said.  In Nyeri he taught for another 25 years.

He did his A-Level in 1981 and joined university years later, graduating in 2006 with a Bachelor's degree in Education.

Mwalimu, as he is popularly known, furthered his education with a Master’s degree in 2020. He is now undertaking his PhD in Education Management and Leadership at the Kenya Methodist University.

The father of four was in 1995 elected supervisory committee member of the Nyeri Teachers Cooperative society — now Newfortis Sacco, which would mark his entry into politics.

He was also elected as an official in the Nyeri Teachers Plaza Housing Cooperative Society, rising to chairman until 2011 when he was elected Knut executive secretary.

Looking back, Kahiga believes he has succeeded in implementing Gakuru’s vision.

Through funding from the World Bank, the county is building a Sh350 million Narumoru Level 4 Hospital.

“We have also been able to operationalise several new health facilities such as Zaina, and we are doing a new alcohol and drugs rehabilitation centre with a capacity of about 100,” he said. 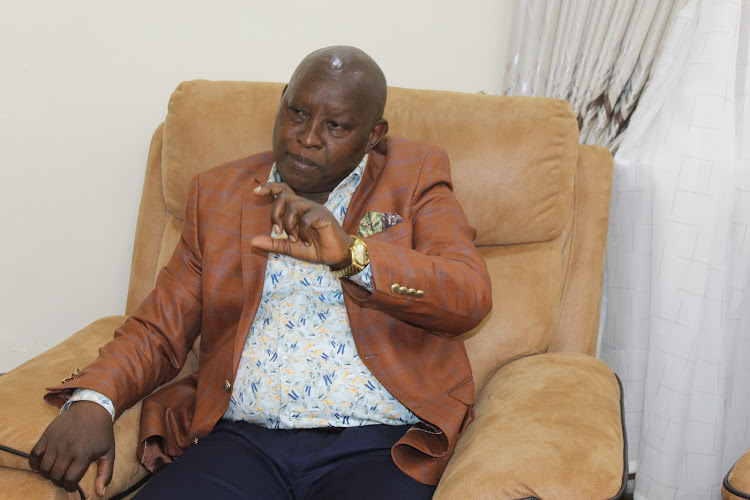 Nyeri Governor Mutahi Kahiga during an interview with the Star on Wednesday, September 1 in Nyeri town
Image: EUTYCUS MUCHIRI

His administration has also embarked on the construction and repairing of markets and decongesting Nyeri town where the county, again partnership with the World Bank, is constructing a Sh 600 million modern bus park.

The county has also procured fire engines to enhance emergency response, while its revenue collection has increased from Sh600 million to Sh860 million annually.

For the youth, the governor initiated an internship programme where the county picks and mentors 200 graduates yearly.  Some 600 youths have benefitted so far.

Kahiga does not believe there was foul play in the accident that claimed Governor Gakuru's life.

He says having been with him on the day before, on a usual talk, they had agreed he travels on the previous evening but Gakuru changed the plans.

Gakuru spent time in the house with his nephew drinking up to 2am and was unable to wake up on time. He was to leave Nyeri at 4am to be in Nairobi slightly earlier than 6am but woke up at 5am.

And while he was to use a Pajero for the trip, he opted for a Mercedes Benz, which he thought was faster.

The vehicle is said to have been speeding when the accident occurred. It was also raining, wet and misty.

“The last time that Mercedes Benz was used was on October 20, when we had Mashujaa Day. He just drove in it from his home to the stadium and back,” he said.

Kahiga says it is unfortunate a few people have not allowed the matter to rest.

He believes there was no way the accident was planned because Gakuru made the decision to change the traveling time, vehicles and drivers.

My opponents are unfit for public office, says Kahiga

Just as in the case at the national level, Kahiga does not get along with his deputy, Caroline Karugu.

While he says he nominated her after consulting some people who felt the position needed to be given to someone from the late governor’s area, their working relationship deteriorated soon after.

She is from Nyaribo, Nyeri Central, where Gakuru came from.

He says Karugu started skipping cabinet meetings and when she attended, she chewed gum all through.

"She also delegated duties assigned to her by the governor and never got along with other members of staff. She later stopped reporting to the office, among other issues," Kahiga said.

The governor says he has unsuccessfully reached out to her to come back and serve the people.

On his sour relationship with Senator Ephraim Maina, the governor says their relationship has not affected service delivery. Unlike him, Kahiga recently fired salvos at Maina.

The senator, he says, started criticising him unfairly four years ago but has kept quiet.

He decided to react when Maina started calling residents "belittling names" and tried to gain political capital by capitalising on the failure by the national government to release funds to counties leading to a shortage of drugs in hospitals.

The senator, he said, lied that the county was installing WiFi in the Nyeri County Referral Hospital morgue.

“When he said we were supplying condoms instead of drugs and he is an old man, I felt no, it is time to tell him that was too much,” he said.

Kahiga is yet to decide on the party he will defend his seat  on in 2022 but "will follow the advice of the people".

His hobbies are sports, though age is limiting him, and watching football. He is a fan of Chelsea Football Club in the EPL and AFC Leopards.

He also likes reading and listening to Gospel and country music. 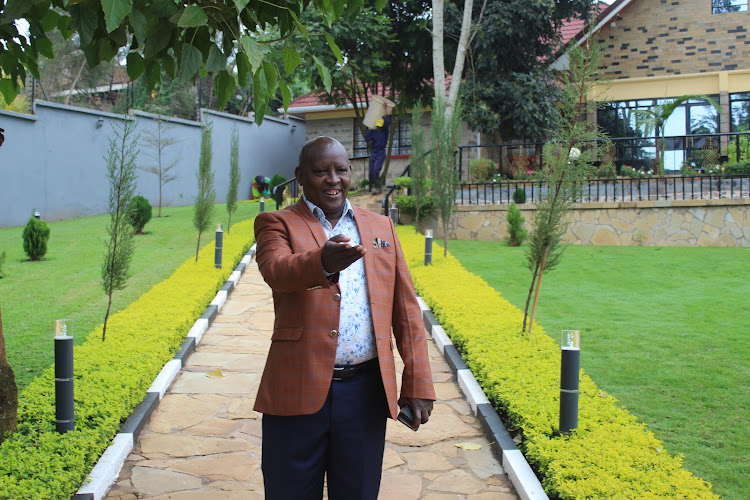