Why the Agikuyu community reveres the Mugumo tree

• For generations, the Mugumo has occupied a mythical place among the Agikuyu who consider it sacred.

• Some people believe that the spirits of the ancestors dwell in Mugumo trees and its canopy has been used as a shrine to offer prayers and sacrifices to gods. 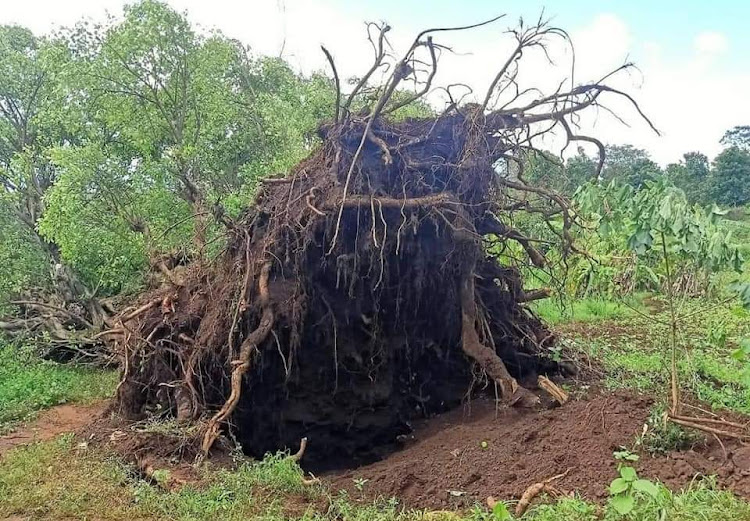 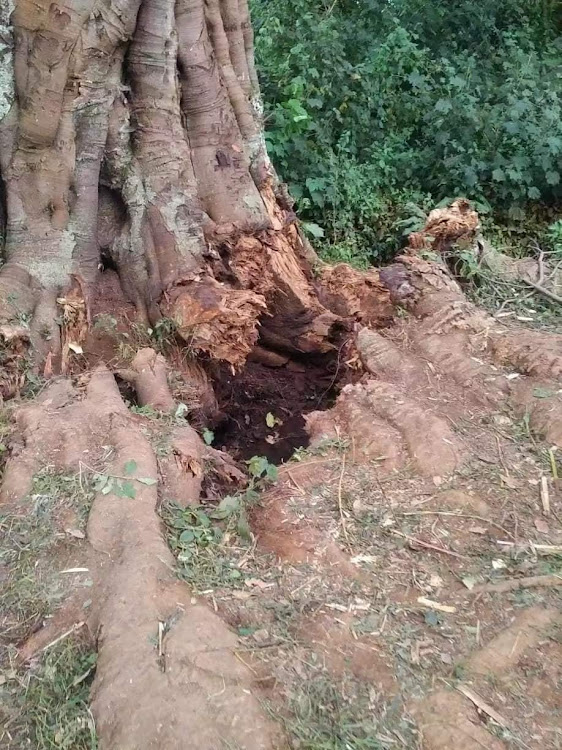 The trunk of a tree that shocked residents of Yamumbi village in Uasin Gishu after falling and rising back after prayer by elders in 2019.
Image: Courtesy 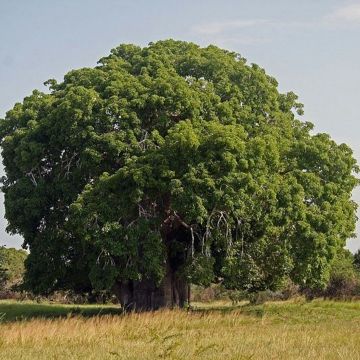 When a Mugumo tree falls, it sends members of the Agikuyu community who dwell near it into a panic — they believe it is a bad omen.

The fallen tree cannot be used for firewood and must be left to rot.

Some believe if you went around a Mugumo tree seven times, you'd change your sex. No one has had that transformation.

For generations, the Mugumo has occupied a mythical place among the Agikuyu who consider it sacred.

Some people believe that the spirits of the ancestors dwell in Mugumo trees and its canopy has been used as a shrine to offer prayers and sacrifices to gods.

Agikuyu ancestors believed that God would heed their prayers when they prayed under the tree.

Elders say the tree is respected for its role in the beliefs and culture of the community that have over the years helped it to thrive.

The tree is not planted but grows wildly in fertile and moist areas, especially near rivers. It is believed that the tree is planted by God.

“We found our great grandfathers worshipping under the tree and saw that their prayers were answered,” Kikuyu Council of Elders national chair Wachira wa Kiago said.

The tree is believed to nurture life as it's towering stature provides shade and supports the growth of other trees under it.

“The tree can live up to 500 years. It acts like an umbrella during drought and provides a sense of peace to the community,” he said.

When Gikuyu, the community’s founding father and his wife were created by God and placed at the Mukurwe wa Nyagathanga shrine, they chose the Mugumo and Mukurwe trees as their sacrificial trees and passed them down to the subsequent generations.

Gaithuma said the ancestors prayed under the trees while facing Kirinyaga, now known as Mt Kenya, where he believed God dwelled.

Not all Mugumo trees are used for rituals. Gaithuma said elders are able to identify trees used for sacrifices as they have soot and burn holes on their trunks.

This is because animals offered for sacrifices to ward off calamities were burnt until they turned to ashes under the Mugumo tree to appease God.

“Every single part of the animal sacrificed for such a purpose, including bones, were burnt completely that no predatory animal could find anything afterwards,” he said.

A similar tree, he noted, is found in Dagoretti market, Subukia and Githunguri among other areas.

Once, some resident living near the tree in Dagoretti decided to prune it. Elders had to cleanse afterwards to prevent a calamity.

Each of the nine clans of the community was told to send an elder who would cleanse the tree alongside cultural priests.

“An elder, who was not sent by his clan attended the cleansing ceremony and was found dead the next morning,” he said.

Should a Mugumo tree fall, elders are summoned to establish whether the tree was used for sacrifices and to understand the reason for its fall.

“If it was used for sacrifices, the elders pray and worship God to do away with any calamity that the fall may signify and pray that it fell out of old age,” he said.

If it was a normal tree, locals are instructed not to get firewood out of it and to respect it, and not disturb it, before they pray together with local elders. The tree should be allowed to rot.

He cited another incident in Uasin Gishu county where a Mugumo fell only to rise back into place weeks later.

In 2019, a Mugumo tree on the border of Yamumbi and Lemok villages on the banks of river Lemok went tumbling down.

About three weeks later, priests met local elders and prayers were held in the morning. The tree miraculously rose back and the river went back to its original course. Shocked residents said they were afraid of what the occurrence signified.

Elder Njoroge wa Njaari is one of the cultural priests who are called upon to conduct rituals and offer sacrifices.

Njoroge told the Star that it is vital for members of the community to respect the tree as failure often has repercussions.

The trees used for sacrifices, he said, are the ones that grow parasitically on other trees. Seeds drop onto a tree and a seedling sprouts, feeding and devouring the host tree until its own roots get to the ground.

He said all areas inhabited by the community has a Mugumo tree that is used for sacrifices.

“Just to cut down the tree, elders have to hold prayers to ask for consent. we have had incidences where people get fatal accidents when they attempt to cut down such trees,” he said.

Those who knowingly use a fallen tree as firewood invite calamity into their lives and could suffer blindness, miscarriages or total infertility.

Members of the public prohibited from accessing the site but were invited to prayers at Mumbi grounds
Counties
1 month ago
by ALICE WAITHERA Correspondent, Murang'a
Central
07 June 2021 - 06:55