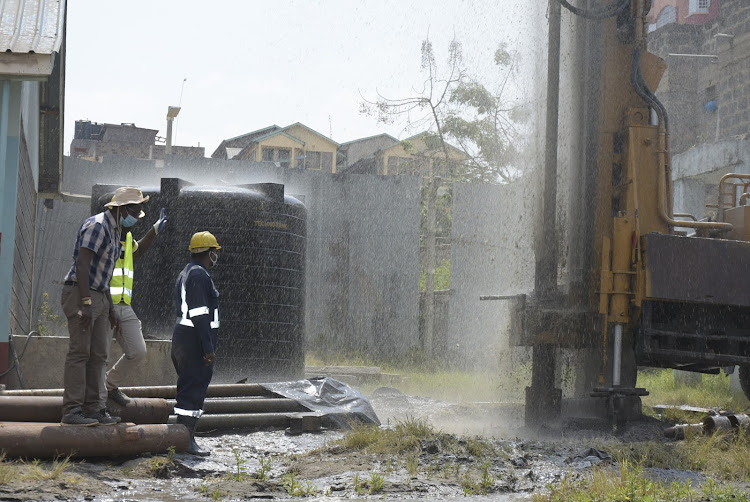 Four boreholes have been sank in Githurai, Mwihoko and Kahawa Wendani, according to Ruiru MP Simon King’ara.

The boreholes have a capacity to produce 50,000 litres of water per hour each.

King’ara, who spoke while inspecting the Kahawa Wendani borehole on Saturday, said two more boreholes will be sank in Gatong’ora ward to serve Gikumari, Kiratina and Mwalimu Farm.

Residents there go for weeks without clean water.

“We are delivering a complete borehole with a pump, an elevated reservoir tank and a vending shop to residents. Schools will be getting water for free while residents will be getting the commodity at relatively low cost,” King’ara said.

The MP did not disclose the cost of the project, but said it was being undertaken by the national government following a drastic rise in the constituency's population.

Ruiru has a population of more than 500,000 residents.

“Ruiru is densely populated and our people have been facing a rough time due to lack of sufficient water for domestic use, especially during this Covid-19 pandemic crisis," he said.

"The government is sinking the boreholes as a mitigation measure to the water crisis the region is facing.”

The MP said water shortage will be completely dealt with once two projects being undertaken by the national government are completed.

These are the Jacaranda water project which will serve Ruiru and the Sh24 billion Kariminu II Dam in Gatundu North.

He said Kiambu residents will be the major beneficiaries since 80 per cent of the water will go to Thika, Juja and Ruiru constituencies, with the remaining 20 per cent going to Nairobi.

“The projects will ensure an all time flow of clean water in our homes. Factories set up in Ruiru will also benefit as there will be no more disruption of their operations due to lack of water,” King’ara said.

Residents welcomed the decision to sink the boreholes.

“We’ve been spending a lot of money on water because a 20 litre jerrycan goes for not less that Sh30, which is on the higher side given that children are home due to the coronavirus pandemic," Kahawa Wendani Residents Association chairman Bernard Kariuki said.

"These boreholes are a godsend and will greatly address the water problem we have been facing for years.”