Safer alternative to tanks with a tap which users have to open and close.

• James Nyakera says his machine is ideal for use in public places as it is hands-free.

• According to him, the public hand-washing points might end up spreading coronavirus through taps that are not sanitised. 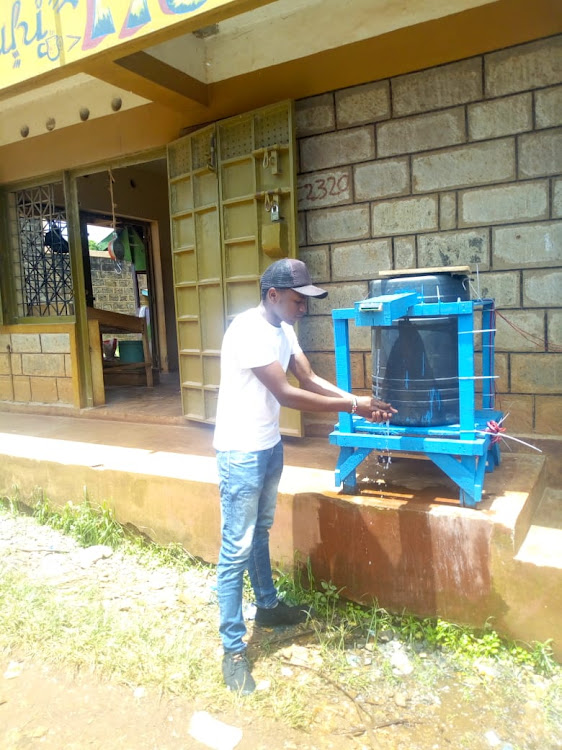 A  Murang'a information technology degree holder has turned a nifty idea into an automatic handwashing machine to help residents fight the coronavirus.

James Nyakera, who is from Mioro village in Mathioya, fit an ultrasonic sensor onto a frame on which a water tank is mounted to dispense soap and water.

When you put a hand underneath the outlet pipe, the sensor activates a pump that releases liquid soap for three seconds.

It then disconnects the soap and dispenses water for 20 seconds that experts have recommended to eradicate the virus from hands.

The 26-year-old man came up with the innovation weeks after the outbreak hit the country.

He told the Star that it took him about two weeks to code the control box fitted in a water tank and connected to the machine.

The machine gets its commands from the control box.

Nyakera said he came with the idea after realising that the public handwashing points may end up spreading the virus.

Most handwashing points consist of a tank with a tap which users have to open and close. Infected people can leave the virus on the taps and pass it on to other unsuspecting people.

“While these handwashing points established in public places are used by hundreds of people in a day, the taps remain unsanitised and could spread the virus to many,” the young man said.

Many villagers cannot afford sanitiser and have to wash their hands to protect themselves.

The jobless graduate, who does odd jobs to survive, is confident that his machine will go a long way in helping control the virus as those who use it will not need to touch it.

Currently, the machine is being used by villagers at Kairo shopping centre.

Nyakera, who  has also made an automatic timer, a liquid dispenser and a remote bulb control, says he can produce 40 machines in a day if he got orders.

After graduating, he returned to his rural home after unsuccessfully trying to secure a job.

He is, however, putting his knowledge in programming to good use. The automatic timer is, for instance, ideal for learning institutions such as primary and secondary schools.

“All I would have to do is feed a school’s timetable into the machine and set the timer. Even when there is no power, the timer will still go off at the set time and ensure learning goes on uninterrupted,” Nyakera said.

His liquid ATM can be used to sell milk, paraffin and petroleum products and does not require someone to control it.

It can distinguish how many coins someone puts in and measure the temperature and humidity of the liquid inside and display it on a screen.

The machine that has a wooden cover also shows time and thanks the client after a transaction is completed.

It can detect Sh5, Sh20, and Sh40 coins and dispense liquids worth the money inserted.

It is also able to detect when the liquid in the machine is diminished and rejects fake coins.