• The alcoholism is due to beer genes, found in many central Kenya men, as well as peer influence and environmental factors.

•The war on alcohol cannot be left to desperate, twig-waving village women out to demonstrate after losing their spouses to the drink - David Makumi. 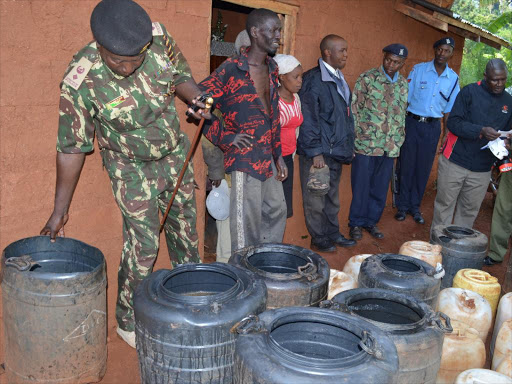 DANGEROUS: Illicit brew that was impounded by police during a raid at Gikandu village in Murang'a county
Image: FILE

Central Kenya has one of the world’s worst levels of alcoholism, with most drinkers suffering severe alcohol use disorder, a new study suggests.

AUD is a chronic brain disease characterised by compulsive alcohol abuse, loss of control over alcohol intake, and a negative emotional state when not drinking.

The study warns that male obsession with alcohol in this part of Kenya could soon be difficult to reverse.

Although the report focused on Murang’a county, the researchers said the results are easily replicated across other Central counties.

“The study established that about 65 per cent of alcohol users in Murang’a who have symptoms of AUD had scores of eight or more,” the authors, Danny Mungai and Ronnie Midigo, say.

The World Health Organisation classifies the presence of six or more symptoms of AUH as severe.

The study is titled 'Social and Cultural Determinants of Health: Understanding the persisting Alcohol Use Disorder (AUD) in the rural populations in Central Kenya' and was published in the AIMS Public Health Journal on December 23.

“On a weekly basis, such alcohol users needed alcoholic drinks first thing in the morning to get themselves going after a night of heavy drinking,” it says.

The study pins the alcoholism disease down to beer genes, found in many central Kenya men, as well as peer influence and environmental factors.

“(The) use of alcohol by father, brewing of alcohol or availability of alcohol at home and perceptions on a positive relationship between cultural beliefs and alcohol abuse were found to be of statistically significant relationship with AUD,” it says.

Mungai and Midigo are researchers from the University of Nairobi and the Great Lakes University of Kisumu respectively. They relied on both qualitative and quantitative data.

If untreated, AUD patients are likely to be killed by infectious diseases or chronic illnesses such as cancer and liver and brain disorders.

The WHO says alcohol abuse is a significant reason why HIV infections and related deaths are rising in Central Kenya.

“The harmful use of alcohol is associated both with an increased risk of acquiring HIV infection and with negative effects on people living with HIV/Aids in terms of treatment outcomes,” says the global status report on alcohol and health 2018 that was released late last year.

Non-Communicable Diseases Alliance of Kenya vice-chairman David Makumi says the war on alcohol cannot be left to desperate twig waving village women out to demonstrate for losing their spouses to the drink.

“There is an urgent need for tough legislation and amendments to the current legislation including the Alcoholic Drinks Control Act 2010 (Mututho laws) to strictly regulate advertisements, revise health warnings, and address alcohol control from a public health standpoint,” Makumi says.

The International Agency for Research in Cancer classifies alcohol as a Group I carcinogen alongside tobacco, Makumi adds.