Undertones indicate the existence of a criminal gang by the name Gaza, assumed to be inspired by the popular Gaza criminal gang from Kayole in Nairobi.

• In February a student was fatally stabbed, a month later another one was shot both incidents described as acts of thuggery.

• Now, the new headache is the increased cases of surprise attacks on students robbing them off their belongings. 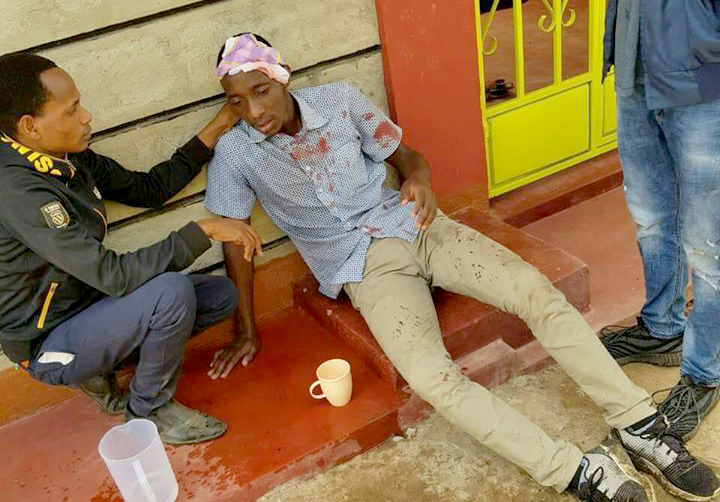 INJURED: A JKUAT student who was cut with a panga by angry residents in Gashororo area of Juja on Monday.
Image: COURTESY

Collins Bigogo was stabbed in the head and left with a cracked skull when JKUAT students protested against rising insecurity.

His near-death experience on the morning of November 11 left him with a cut the size of his finger. He bled profusely. Bigogo and 22 other students were referred to Kenyatta National Hospital.

It was a consequence for a protest that boomeranged. The students hoped to raise concerns over insecurity.

In the first 15 days of November, 10 JKUAT students had been waylaid on their way from school. Some incidents were reported as early as 4pm.

A day before the protest, the student association leadership met top security officials in the area and the meeting resolution was that security agents would look into the situation.

In his own words, Bigogo described the protest as 'inevitable'. He said that the evening of the meeting, three students – two female, and a male – were attacked outside the university gate. Their belongings were stolen but left unhurt.

"It was supposed to be a peaceful procession to raise concerns but the police were reluctant to let us out of the gate and as the crowd gathered, students made their way out of school," Bigogo told the Star on Friday.

The protest only lasted 20 minutes before it turned into a riot that left students sandwiched between the police and residents.

JKUAT is arguably a major factor in the development of Juja town. Residential estates are emerging around the institution.

Three areas – High Point, Sunrise Street and Gashororo – are the most preferred places for students living outside school.

The university only has the capacity to accommodate 2,700 students. That is just an eighth of the 35,000 total population.

The majority of students live outside the school in rented hostels or houses.

In February, a female student was stabbed to death by thugs at High Point.

Juja DCIO Ali Samatar yesterday did not respond to calls or texts seeking to establish the progress of the investigation into the matter.

However, sources said police are still searching for the perpetrators.

In March, a student was shot on Sunrise Street by thugs in yet another incident.

Gashororo is by far the biggest and most popular residential area for the students.

Extending about two kilometres, the area is densely populated with a variety of houses to choose from and at the most affordable prices.

Students' association president Clinton Osoro, however, said all attacks reported to them in November originated from this area.

"If you are moving to Juja as a newbie, I would advise you to keep off Gashororo completely. It is the most insecure place at the moment," Osoro told the Star on Friday. "The place is dark and one of the things we want is increased lighting," he added.

The dean of students at the university, Reverend Wakaba, told the Star on Friday that the last quarter of the year – September to December – increased cases of attack on students are recorded.

"Most of these are first-year students who have reported to school and as they explore their new-found freedom, and this is accompanied by high adrenaline, they are an easy target," Wakaba said.

Reports indicate the existence of a criminal gang by the name Gaza, assumed to be inspired by the infamous Gaza gang from Kayole.

Central regional commissioner Wilfred Nyagwanga yesterday failed to confirm or deny the existence of the gang. He said, however, they are investigating the matter.

Wakaba said he does not know of an organised criminal gang, but is aware of frequent attacks on students.

"But even as we work with security agencies, we also sensitise students to remain cautious and not to be reckless in a way that can put your life in danger," Wakaba said.

There are also claims that some boda boda operators are part of the gang terrorising students or helping the gang in doing so.

The students are further concerned of the uncertainty of there safety given the strained relationship with the locality, following the confrontation during the protest.