• Assorted weapons including guns, bullets and grenades were ‘smuggled’ into county government office during the drill.

• Kahiga says after the operation, his security team is alert. 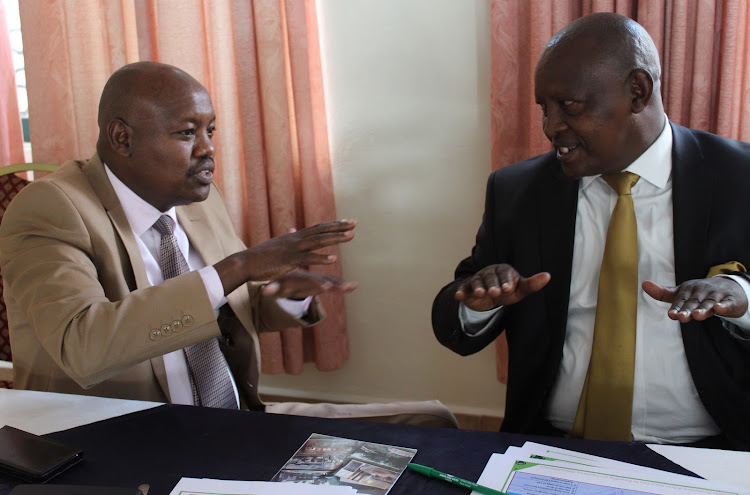 SHAKEN TO THE CORE: Nyeri county commissioner David Kipkemei and Governor Mutahi Kahiga during a counterterrorism meeting in Nyeri town at the weekend
Image: EUTYCAS MUCHIRI

Nyeri Governor Mutahi Kahiga has opened up on a security drill in his office last year that left him badly shaken.

Assorted weapons including guns, bullets and grenades were ‘smuggled’ into the county government office compound in Nyeri town before finding their way into the governor’s office.

The clueless governor was in his office as it happened.

The drill meant to check the state of security in the county offices left his security, senior county officials and county askaris shocked to the core.

It was mounted following reports radicalisation could have been taking place in the county.

Nyeri is a transit town connecting parts of Eastern and North Eastern regions through the Isiolo - Nanyuki – Nyeri – Nairobi route, which is also in the process of being upgraded to a dual carriageway.

The town is therefore exposed and believed to be a possible target or safe haven for terrorists conducting radicalisation due to prevailing peace in the area.

The governor and his officials kept the incident a guarded secret until recently.

Despite shocking the county officials and security, the exercise led to boosting of security in the offices where residents were thoroughly screened by security officers before accessing the offices.

Members of the public including journalists invited for press briefings were not allowed to access the offices with phones or any other form of luggage.

Kahiga made the disclosure during a three-day Nyeri county countering violent extremism consultative meeting held in a hotel in Nyeri town over the weekend.

The meeting was themed, ‘Towards Development of Nyeri County Action Plan for Preventing and Countering Violent Extremism'.

It was attended by security stakeholders and members of the public.

The governor admitted that he was shocked at how the team conducting the drill gained entry into the county government compound to his office carrying the weapons undetected.

I thought they were carrying cameras but what I saw sent shivers down my spine. They were grenades and guns

“The team came and passed all security checks, gained entry into the county government offices compound until they got into my office,” Kahiga said.

He explained that he started chatting with the visitors until he was shown what they were carrying.

“I thought they were carrying cameras but what I saw sent shivers down my spine. They were grenades and guns,” he said.

This happened despite him having about six armed security officials guarding the premises including the main gate.

The security officials later informed him that some of the weapons were capable of causing untold damage not only in his offices but also in Nyeri town.

“They kept all those weapons on my table and I wondered whether I should have my security team replaced,” he said.

The governor said though it was just a drill, it was a serious matter and a lesson that residents, and even himself, have to learn and be alert at all times.

He told residents that terrorism was real, adding that attacks have now come closer home and are directly affecting Kenyans.

The county chief emphasised on the need for residents to change their mindsets to help security officials fight the vice saying before, terrorists bore names from foreign countries but today they include Kenyans.

“Solutions to problems of violent extremism are not in Nairobi but with the local people on the ground. It is time we look for homegrown solutions,” Kahiga said.

To fight radicalisation, the governor said there is a need to empower the youth saying his government launched a project that engages 200 youths yearly in a paid internship programme.

Each of the youth gets Sh10,000 monthly and are put under people who mentor them. The county is in the process of engaging the second cohort.

He said the county government is looking forward to increasing the number of youth polytechnics to accommodate more young people.