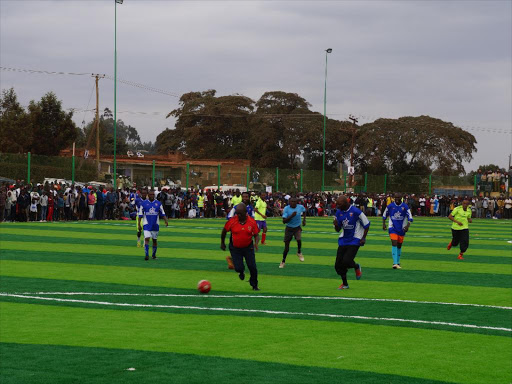 Kiambu Governor William Kabogo (in red) dribbles the ball during a match to mark the opening of Gikambura 11-Aside Football Stadium, Kikuyu, on Sunday /GEORGE MUGO

The Gikambura 11-Aside Football Stadium in Kikuyu constituency was launched on Sunday.

The additional fields will include Gachororo Seven-Aside, Ruiru 11-Aside and Kagwe 11-Aside, which are to be constructed for Sh42 million.

Mugo said the fields are constructed in rural areas to meet the devolution requirements, nurture talent and give young people facilities that meet international standards.

“These types of compounds are commonly found abroad. They will expose our talent to what is used abroad,” she said.

He said many teams have visited the field and asked whether they can use it.

“When the levelling was done and the carpet was spread, a lot of teams started visiting the compound. They asked how they can enrol for a tournament, but it was not complete yet,” Kabogo said.

“However, they were told how they will go about it if they have to use it.”

The ultramodern, Astro Turf Gikambura 11-Aside Football Stadium has lights for night matches.

Kabogo said teams from the county will not be charged any fee, but those from other counties will pay affordable fees.

The proceeds will be used for maintenance and to pay employees.

“We know maintenance expenses will be incurred. Therefore, the fees will go to maintenance and the rest to our two watchmen,” the county boss said.

Kabogo urged residents to reelect him for another term because “I have started projects that have benefitted residents and transformed the county into a role model.”

He accused his rivals of maligning him “through propaganda, malice and hatred” and urged the electorate to ignore them.

“At times, I feel pain in my heart when I’m compared to some of my opponents. I’ve served this county with diligence and dedication to improve its situation,” he said.

Kabogo, an independent, is in the race against JP’s Ferdinand Waititu.

Post a comment
WATCH: The latest videos from the Star
by GEORGE MUGO @geomugoh
Central
01 August 2017 - 02:00
Read The E-Paper