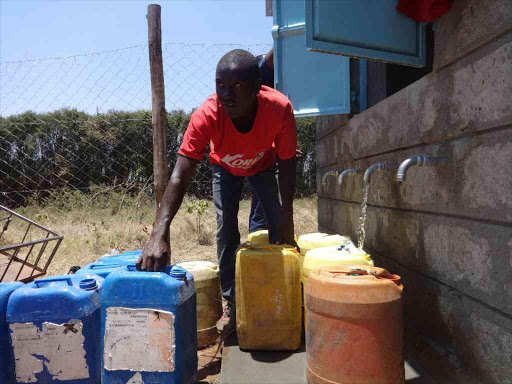 The water shortage in Githurai 45 will soon end, following the commissioning on Friday of a Sh6 million water project by the Kiambu government to serve 300,000 residents.

The project, in Kizito in Mwihoko ward, will also serve Kahawa Sukari, Kahawa Wendani and Mwihoko.

Governor William Kabogo said residents have suffered for a long time because the few boreholes that exist produce salty water.

“I pledged to relieve mothers of the burden of walking for long distances in search of clean water,” Kabogo said. “This is the first project in this area. Two more are on the way.”

The county chief said the county will help residents instal pipes to their homes to ease distribution and access. He said his administration has made clean water accessible to most households.

“Ninety per cent of Kiambu residents enjoy access to clean drinking water. Before devolution, it was at 45 per cent,” Kabogo said. “The remaining 10 per cent are mainly from semi-arid areas and we are working round the clock to ensure they, too, get water.”

He said semi-arid areas include parts of Ruiru, Juja, Thika and Lari.

Kabogo said the county has been distributing water tanks there through the Kiambu Biashara Fund. Plans to drill them water is on course.

Water executive Esther Njuguna said the borehole in Mwihoko can produce 30 cubic metres of water per hour. He said Githurai has been under the Nairobi Water and Sewerage Company, hence the crisis it is facing.

Njuguna said the county has met with Nawasco, the Athi Water Services Board and Ruiru-Juja Water and Sewerage Company to provide water to Githurai residents, through Rujwasco.

“Soon, we will have the go-ahead. We will drill more boreholes to ensure every household has enough water for domestic use,” he said. “The sewerage project is almost complete and we expect it to be commissioned soon.”