Anti-jiggers crusaders said the jigger menace has been caused by poor hygiene in villages and outdated beliefs.

•ssistant County Commissioner Robert Kamau and anti-jiggers crusaders said the jigger menace has been caused by poor hygiene in villages and outdated beliefs.

•While addressing the press, he said they are collecting data to document the number of residents infected with jiggers. 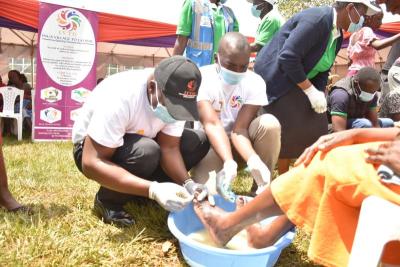 The CEO of the NGO Zacheuas Ogonji helping the community on jigger campaign.
Image: MARTIN OMBIMA

A section of Vihiga residents has blamed witchcraft for the jiggers invasion.

Assistant County Commissioner Robert Kamau and anti-jiggers crusaders said the jigger menace has been caused by poor hygiene in villages and outdated beliefs.

While addressing the press, he said they are collecting data to document the number of residents infected with jiggers.

"Emuhaya has thousands of people battling jiggers but the figure could be higher in the entire county. A lot needs to be done to help the infected individuals and affected families," said the administrator.

Kamau was speaking during a jigger eradication campaign in the Emuhuya sub-county in Vihiga,

He said the government has failed in eradicating jiggers because a majority of the families have failed to seek treatment and keep their homes clean.

The report prepared by the Ministry of health and other non-governmental agencies in 2014 indicated that Vihiga County is among the counties badly hit by the Jiggers menace.

Other counties include Busia, Bungoma and Kakamega in the Western region.

The jiggers victims in the Emuhaya sub-county benefited from a free medical camp courtesy of the nongovernmental organization of Inua Village to Global Foundation group.

The CEO of the NGO Zacheuas Ogonji said there is the need for communities to be sensitized and empowered with information as a way of eradicating fleas.

"We managed to treat over 100 community members infested with jiggers. The event also attracted over 200 participants from neighbouring counties," said Ogonji.

"Our biggest concern is how the jigger menace is being handled. The residents have beliefs that make them shy away from seeking treatment because they believe conventional medicine cannot work."

Ogonji said some of the victims can hardly walk on their own and most of them have become burdens to family members.

Some residents believe Jiggers are hereditary and flow in the family lineage. County director of Health Martin Sikuku said they have set aside Sh13 million in the 2022/2023 financial year budget to address the menace.

"The allocation is meant to fight Neglected tropical diseases including the jiggers menace," said Shikuku."

We have identified the worst-hit areas across our county and our focus will be on those particular regions.

"According to Shikuku, community health volunteers will be sent to villages to attend to victims of jiggers.

Such people would rather die than seek medical attention fearing repurcussion from unknown mystic powers.
Counties
6 months ago
WATCH: The latest videos from the Star
by MARTIN OMBIMA
Counties
22 May 2022 - 12:17