• Livestock PS warns the public to ensure that they only consume meat products that have been certified as safe for human consumption.

•The Kenya National Bureau of Statistics reported in 2019 the donkey population had declined from 1.8 million donkeys in 2009 to 1.17 million in 2019. Numbers dwindling. 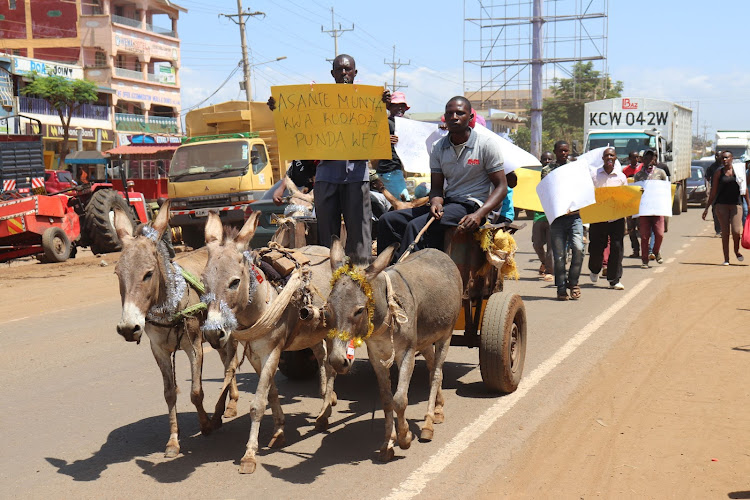 ESSENTIAL: Donkey owners in Kirinyaga county support a ban on donkey slaughter as the beasts of burden are essential to their livelihoods.
Image: FILE:

The Ministry of Agriculture has appealed a court decision to lift the ban on the slaughter of donkeys.

In February 2020, Agriculture CS Peter Munya banned the slaughter of donkeys in the country due to rampant theft of the animals.

Munya assured that the slaughterhouses would be opened once breeding had been done and there was an increase in the donkey population.

“We did not close the slaughterhouses to punish people, but to protect donkey owners who are earning a living from the use of donkeys,” he said.

Munya said he made the decision after an outcry from donkey owners who had complained of an increase in theft of the animals.

The decision was quashed in May, with the High Court stating that the government had failed to sufficiently defend the case.

“The legal notice violates the rights of the applicant under Article 47 of the Constitution and the applicant is granted a stay to operate in light of the failure by the respondent to file back his response,” the ruling reads.

Livestock PS Harry Kimtai said on Thursday that the ministry made the appeal due to public complaints.

He said members of the public have reported an increase in cases of donkey theft since the abattoirs were reopened.

Kimtai said abattoir operators have declined several invitations to sit with the regulatory authority, the Department of Veterinary Services, to agree on regulatory standards.

“The ministry therefore prefers that the ban remains in place until these measures, which should be in line with international and national requirements. Currently, any abattoir slaughtering donkeys is doing so without meat inspection officers present, which is a great health risk to consumers both locally and in the international market,” he said.

The PS warned members of the public to be vigilant and ensure they only consume meat products that have been certified as safe for human consumption.

The abattoirs were licensed in 2016 and an estimated 1,000 donkeys are slaughtered every day in the export slaughterhouses.

Munya called on institutions that are spearheading donkey breeding to fast-track the process to help regenerate their population.

Donkey prices up by Sh10,000 after ban on slaughter and meat export

Ban stays until Kenya has sustainable breeding, enough donkeys for domestic use and export.
Counties
5 months ago

There are four slaughterhouses for the animal in the country
News
2 months ago
by AGATHA NGOTHO Science Writer
Counties
15 July 2021 - 23:00