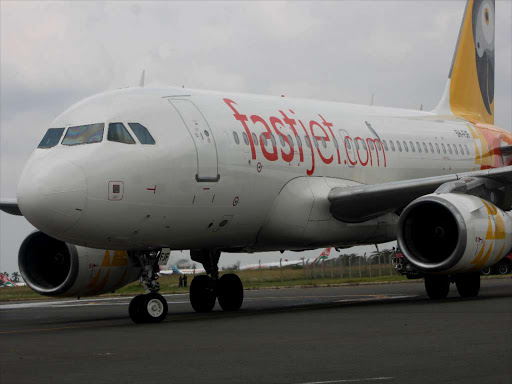 Tanzanian Fastjet at the JKIA in Nairobi on January 11. Photo/Enos Teche.

Cash-strapped low-cost African airline Fastjet said on Friday it had managed to extend the terms of a loan to March 31.

In June the airline entered agreements with Annunaki Investments and SSCG Africa Holdings, following which the airline lent $5 million from its Zimbabwe unit to Annunaki in return for a $2 million loan to Fastjet from SSCG.

The low-cost airline said the loan amount from Fastjet Zimbabwe to Annunaki had increased from $5 million to $7 million, after certain currency devaluations.

Fastjet has been facing a multitude of issues mainly relating to its cash balance and has struggled to secure cash through fundraising and equity refinancing to continue operations.

It faced regulatory hurdles after Tanzanian aviation authorities warned of revoking the company’s licence. This prompted Fastjet Airlines Tanzania, a separate entity from the parent, to cancel all flights for over a month in the country.

In early December, Fastjet had warned it may have to go into administration, shut shop or sell itself as it was running on near-empty coffers.

Since then, there has not been talks of this since although it managed to raise some cash.