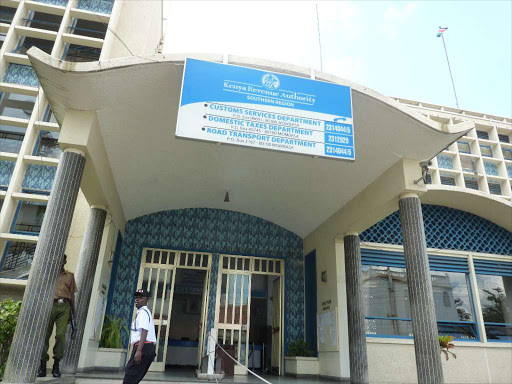 The KRA offices in Mombasa.FILE

Kenya Revenue Authority fails to collect at least 528 billion of tax due every year equivalent to 6.6 percent of the country’s GDP estimated at Sh8 trillion.

According to the taxman’s Seventh Corporate Plan for 2018-2021, at least 30 per cent of the taxes due in five main tax heads in Kenya is not collected every year.

To reduce the tax gap and achieve revenue growth above the nominal GDP growth rate, KRA is planning to expand tax base that will see it raise the number of active taxpayers from 3.94 million to 7 million by 2021.

Early this month, the tax collector introduced Presumptive Tax of 15 per cent on business permits for small-scale traders whose turnover is less than Sh5 million.

The Institute of Public Finance chief executive James Muraguri told the Star that by allowing county governments to charge and collect the presumptive tax, the taxman managed to net informal small businesses in counties into tax bracket.

It also plans to focus on data driven decision-making, robust intelligence adopt effective dispute resolution and strengthen debt and account management. Through the corporate strategy launched mid this week, the taxman is targeting to collect at least Sh6.1 trillion in next three years.

The tax agency missed its sixth corporate strategy revenue collection target by Sh184.8 billion. It managed only Sh4 trillion against a target of Sh4.185 trillion for the three years that ran from 2015 to 2018.

Speaking during the launch, Treasury CS Henry Rotich said the Corporate Plan focusses on the country’s development agenda as spelt out in the Kenya Vision 2030, the Third Medium Term Plan (MTP 2018-2022 ), the Budget Policy Statement 2018 and the Big Four agenda.

“We undertake to work with KRA and all stakeholders to continuously develop appropriate policies and review of the regulatory regimes to meet the needs of all Kenyans,” Rotich said.

On his part, commissioner general John Njiraini said the seventh Corporate Plan is designed to prioritise key national flagship drivers which project a transformed and a self-reliant nation in the years to come.