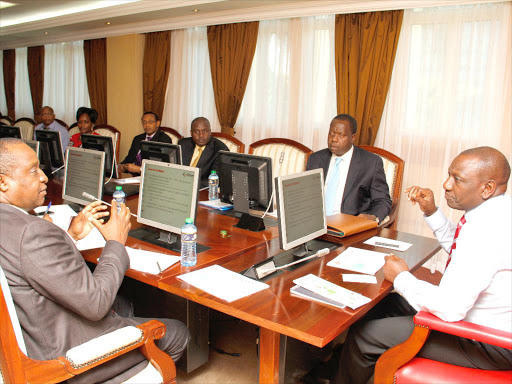 DP William Ruto with Treasury CS Henry Rotich and the then ICT CS Fred Matiang’i during a meeting on progress in the digitisation of government business at his office in Harambee House Annex on January 13 2015. Photo/DPPS

Kenya’s global competitiveness is likely to be affected in a decades time due to reshoring of manufacturing tasks from labour intensive region to a capital intensive region.

This means that in 10-20 years from now Kenya’s labour market will hardly survive disruption from technology and more foreign businesses will begin to exit Kenya for their host countries.

Besides, the cost of using goods manufactured by robots will be more cheaper than using human capital.

“ If we do not take advantage of digitization then with time we will not be able to compete with international markets and we will see the sector continue to decline,” Kenya Association of Manufacturers CEO Phyllis Wakiaga said.

Since 2011, performance of the manufacturing sector ahs been declining from an average of 12 per cent of Gross Domestic product to the current nine per cent. A pillar under President Kenyatta’s big four Agenda, the government intends to grow its share to the country’s GDP from 9 per cent to 15 per cent in the next five years.

A study released on Thursday by the association and the Overseas Development Institute attributes the trend to an increasingly digital future.

While the cost of human labour is approximated at Sh300 on average by Pathways for prosperity commission the operation cost of a robot in Kenya is estimated at Sh2800 per hour.

However, analysis by the commission indicate that the tables will turn in a decades time when the cost of operating a robot will go down to Sh500 per hour while cost of human labour will increase to an estimated Sh1300 per hour.

It reveals that currently 97 per cent of manufacturing firms in Kenya use computers and 93 per cent have internet , However only 54 per cent have a web presence and 40 per cent are engaged in e-commerce.

Further, it shows that while 99 per cent of SMEs firms have access to Internet less than 65 per cent have a web presence and less than 25 per cent are using cloud computing.

To foster competitiveness, the study calls for low interest rates spread through cutting inefficiencies and lowering collateral requirements for investment in digital products. It also recommends a cut in electricity costs to nine cents per Kilowatt hour, and the use of regional and Continental approaches to e-commerce and trade in digital products and services.

On occasions where the the developed countries lead firms do not re shore,the study shows that most of them will automate their entire value chain as a way to remain competitive.