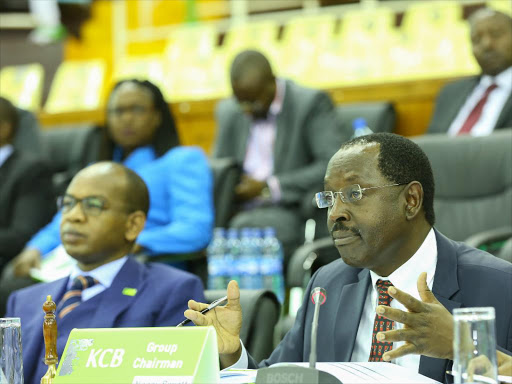 KCB Group has become the latest lender to lay off staff as the industry adjusts to “hard times” touched off by rising loans default rate, interest controls and tight regulations.

The largest bank in East and Central Africa by assets has opened the exit door for employees who wish to retire early as it gears up for the next phase of layoffs, two months after it downplayed media reports it planned to retrench more than 500 staff.

KCB’s voluntary early retirement scheme, part of the ongoing implementation of its transformation strategy, targets to cut its Sh17.72 billion wage bill by about Sh2 billion every year.

KCB, which will be paying Sh9.1 billion in dividends this year out of Sh19.72 billion net profit in 2016, has not disclosed the number of staff to be affected. The lender, however, says it will recover the one-off undisclosed retrenchment cost after 18 months. The 12-member KCB Group’s board approved the programme on Thursday ahead of an annual general meeting on Friday.

“The programme is expected to align the competing needs of adapting to a banking industry whose outlook has been dimmed by legislative and regulatory reforms, and fast evolving technology platforms that are now attracting non-traditional players into the financial services sector,” KCB said in a statement released late Thursday.

KCB joins more than a dozen of the 42 lenders that have retrenched staff to protect margins, largely impacted by capping of loan charges at four percentage points above the prevailing 10 per cent Central Bank Rate. Interest paid on term deposits has also been put at a minimum of 70 per cent of the CBR.

Some of the other banks which have completed or in final stage of laying off employees include largest lender by deposit accounts Equity Group ( 400 ), StanChart ( 300 ), Family Bank ( 250 ), Sidian ( 108 ), First Community ( 106 ), and NIC ( 32 ). Bank of Africa [which closed 12 branches in January], National Bank and Ecobank are some of the lenders which have axed undisclosed employees.

KCB’s retrenchment will largely target staff in departments which have not met the targets set at the beginning of the year and those whose roles have been taken over by technology, the giant lender has hinted. The bank last year sank Sh2.5 billion in digitising its operations, including upgrade of the IT system.

Chief executive Joshua Oigara said the strategic investment was meant to “simplify our operations, reduce our expenses, stay closer and much connected to our customers and boost returns to our shareholders”.

“At the beginning of this year I shared with our employees our vision to accelerate our market leadership in each of the markets we operate in today,” Oigara said.

Staff who will be affected by the lay-off, the bank has pledged, will be offered “generous severance terms” and will be informed three months before they are shown the exit door. Their medical cover will remain effective for the remainder of the year, the CEO said, adding the lender will also pay off a quarter of their staff loan balance. They will also continue servicing the remainder of the loan at preferential staff rate for six months.

“We understand this is a big decision taken by our company, and one that will have an impact on some of our staffs’ personal lives,” Oigara said.

Post a comment
WATCH: The latest videos from the Star
by CONSTANT MUNDA @mundaconstant
Counties
22 April 2017 - 01:00
Read The E-Paper