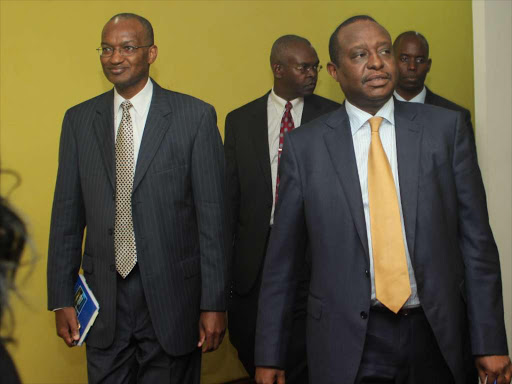 Commercial banks continued to issue notices to customers on their intention to cut interest rates in line with the 97 basis-point fall in the Kenya Banks Reference on July 25.

The under-fire lenders have moved to make amends with the public by committing to adjust rates in line with the policy stance taken by the eight-member Central Bank’s Monetary Policy Committee.

This is in a bid to persuade President Uhuru Kenyatta not to assent to the Banking (Amendment) Bill 2015 which will cap interest rates at 400 basis points above the prevailing 10.5 per cent Central Bank Rate on signing.

Proponents of the widely popular bill have accused lenders of failing to self-regulate, reporting “super profits” while “stifling” growth and development of micro, small and medium-sized enterprises through high cost of credit.

The besieged lenders on Wednesday presented a seven-point memorandum of understanding with the public to the Central Bank governor Patrick Njoroge.

This followed 10 days of discussions among the industry players, the CBK and National Treasury after the bill, sponsored by Kiambu Town legislator Jude Njomo, was unanimously passed by the National Assembly on July 27.

Asked why the banks should be trusted this time given their past failures on self-regulation, the CBK governor said: “This time is different because we know the damage that we are causing to the economy through high interest rates and also the damage we will cause by taking that particular action (signing of the bill into law). In terms of monitoring, we will come in and monitor it. We have the best chance of success but we also appreciate that success will not be over one day or two days. It is a journey”

And on Friday, mid-tier lender Family Bank, Bank of Africa and Bank of Baroda announced they will reduce lending rates by 97 basis points from August 25, a month after the KBRR was slashed by the same margin.

State-owned National Bank will, however, cut hers by 100 basis points from September 1.

They join others – including the Kenyatta family-owned CBA, Standard Chartered and I&M – which have also said they will adjust rates in line with the KBRR.

Geoffrey Odundo, the CEO of Nairobi Securities Exchange where 11 of the 41 banks in operations trade, said capping of interest rates may hit the bourse hard. He said foreign and institutional investors like pension schemes are largely attracted to the market by high valuation of banking stocks which account for about 42 per cent of market value.

“A low interest rate regime is socially beneficial as it also protects against usurious lending practices and can be used to guard against the exploitation of vulnerable members of society,” Odundo said in a statement. “However, capping of interest rates may negatively impact this sector with a knock-on effect of dampening broader stock market valuations.”

The banks have also pledged a Sh30 billion facility to the MSMEs, the drivers of Kenya's growth, at a “concessional” rate of not more than 14.5 per cent. They have also scrapped the “nuisance” bank account closing charges.