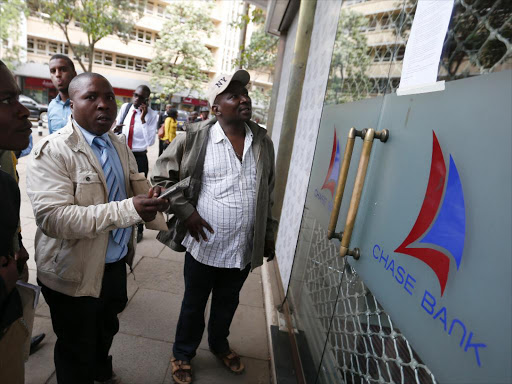 Shortly before close of business on Wednesday, Chase Bank managers stationed at the headquarters in Riverside, Nairobi, received an email directing them to report very early on duty the following day.

It had been a hectic day, with some of the bank’s employees at various branches getting into fistfights with depositors who sought to withdraw money from their accounts.

The bank run, according to well-placed sources, led to Sh8 billion in total being drawn out by depositors in a single day! This compelled the Central Bank of Kenya, which had been closely monitoring the liquidity of Chase Bank, to place it under receivership. This, despite the CBK governor and some key officials of the regulator sacrificing their sleep in a bid to salvage the situation.

Although the staff knew there was a problem in the company, they never expected the bank would be placed under receivership especially after the reassurance by the CBK governor the previous day.

When the more than 200 Chase Bank employees based at the headquarters walked into the banking hall, the only familiar person they saw was the bank’s general manager Parmain Ole Narikae who then introduced the new man in charge.

That was about 7am yesterday, and the unfamiliar man was none other than the Kenya Deposit Insurance Corporation’s receiver manager Mahmud Ahmed Mahmud who was then invited to address the bewildered staff.

He told the shocked employees he was now in charge and they needed to shift allegiance to him.

“I am an international expert in this kind of thing and management; and when there is a run even in the biggest bank in the world, there is nothing that can be done because a bank actually survives on trust and confidence. So there was massive run yesterday and the only way to stem this massive run is not assemble 200 people here and come up with a strategy,” Mahmud told the employees.

He said issues of the 1,600 employees will be addressed but asked all of them to take a day off as KDIC sorted out receivership matters.

No employee was allowed to carry anything out of the building and branch workers were not even allowed further into the building in which they had worked until Wednesday.

Minutes after, the CBK announced on its website that the bank had been placed under receivership. Three hours later, the CBK governor Patrick Njoroge then addressed a press conference at the regulator’s boardroom as thousands of depositors swarmed Chase Bank branches and started massive withdrawals.

Murmurs that started weeks ago had led to panic withdrawals that forced closure of the bank.

A betting company is reported to have gradually moved about Sh4 billion to another financial institution over the last few days.

By the end of Wednesday, more than Sh7.6 billion had been moved from various Chase Bank branches across the country. The amount is seven times the withdrawal transaction limit placed by CBK.

The bank was closed hardly 12 hours after the CBK governor downplayed reports that the bank was going under.

Njoroge said yesterday Chase Bank had been experiencing liquidity difficulties terming the social media reports on the bank’s imminent ‘collapse’ as malicious. Chairman Zafrullah Khan and group MD Duncan Kabui were pushed out a day before the closure.

Financial reports of the bank were restated and new ones published on Wednesday showing Chase Bank had understated its loan portfolio, overstated its profit and had huge insider loans.

Ouestions linger on how a bank which in 2014 made a profit of Sh2.3 billion, and had declared total assets worth Sh107 billion and Sh96 billion as liabilities could face liquidity problems so soon.

The bank’s core capital had been put at Sh11 billion.

In 2014, the bank borrowed Sh15.5 billion and its loans to customers had risen to Sh 64.4 billion. Staff loans accounted for Sh1.8 billion and director loans stood at Sh1.37 billion.

But the bank’s audited accounts for last year revealed a major shift between October and December.

Between October 2015 and December non-performing loans grew from Sh1.7 billion to Sh10 billion, an increase of Sh8.3 billion.

The closure of the bank, which had initiated a massive agri-business portfolio, will affect many including East African Breweries Limited, John Deere Machinery and hundreds of small and medium enterprises. Chase Bank has been operating for 20 years.