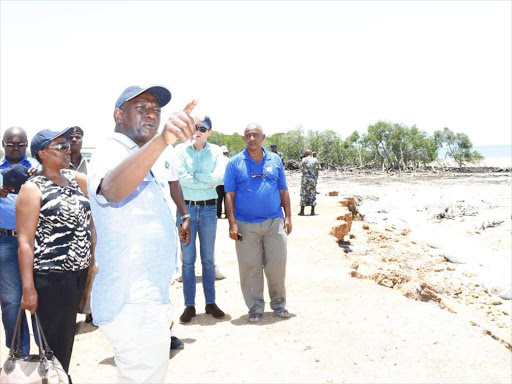 Energy CS Charles Keter and his Ugandan counterpart, representatives of Tullow Oil, Total and Cnoc of china were on a fact finding mission on the best route to construct the pipeline. They toured Lamu and Tanga port.

He said Uganda is concerned the acquisition of land and its compensation to pave way for the pipeline would drag the process.

The PS, however, said Kenya has been successful in securing land for development of major infrastructure projects, including the ongoing building of the Standard Gauge Railway where about Sh12 billion has been paid out in compensation so far.

The land issues add a new twist to the proposed 1,500 kilometre-long pipeline from oil-rich Hoima in western Uganda to Lamu.

Uganda and its investors have previously raised concerns over security and the cost of building the infrastructure.

Kenya has less than two weeks to convince its biggest regional trade partner when the two presidents meet again in Kampala.

Technical teams from both countries are said to focus on comparative costs of building a pipeline through Lamu and Tanzania and the ease of construction on each route.

“Our side and Ugandans will come up with a solution or a final position. I think our route is cheaper, more efficient and much better. So with that it is up to us to convince them,” Nyakera said.

Uganda, which is contemplating an alternative route to Tanga in Tanzania, has delayed making a decision on its preferred route to transport crude oil from its oil fields in northern and western regions, setting up Kenya and Tanzania for intense lobbying.