Meru farmers get export market for bananas in Hungary

• Meru Banana farmers are expected to reap big after winning a supply order to export pancake and Banana flour to Hungary.

• ICOBO has employed 15 people and directly sources their bananas for processing from 2, 000 contracted farmers, thus creating a ready market for the farmers. 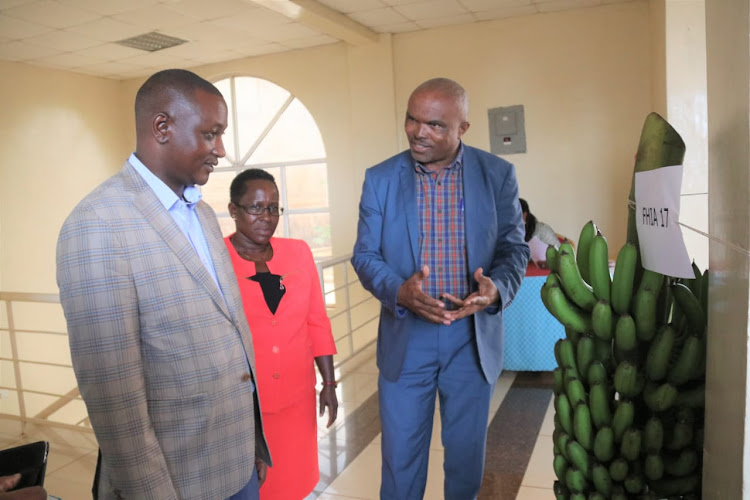 Meru Banana farmers are expected to reap big after winning a supply order to export pancake and banana flour to Hungary.

He said ICOBO has employed 15 people and directly sources their bananas for processing from 2, 000 contracted farmers, thus creating a ready market for the farmers.

“We supply once every three months due to shipment. We export twelve tonnes at a value of Sh450 per kilo. They are in charge of shipment and the containers we use in the industry are theirs, this has improved the hygiene resolved any fears associated with production and processing,” Kiambi said.

The factory faces power supply challenges and needs a 24-hour reliable drier. Other problems include deplorable roads to link farmers easily to the manufacturing industry and financial constraints to support their activities. He asked the national government to remove trade barriers so that agribusiness will thrive.

We also appeal to Nema on ICO standards policy, it affects us. We are also encountered challenges after the ban of plastic a bag, which were very good, was enforced. We plead with the national government to look into this.  It somehow destroyed our returns. We are good with the Kenya Bureau of standards,” Kiambi said.

Meru is known for the production of different banana varieties including William Hybrid, Gross Mitchel (Kampala), Fhia 17, Giant Carendash, Uganda Green (Kiganda) and plantains that are commonly known as Gichagara, among others.

Mama Shiku, a trader who buys bananas at Gakoromone Market said farmers are exploited but they have no other option.

Meru Governor Kiraitu Murungi administration is rallying the sub sector farmers to practice mor of value addition through the production of crisps, assorted flours, and banana wines among other products.

The government has embarked on banana productivity and profitability.

She said she is impressive individuals had come up with by products from the locally available bananas.

“I am glad that people now have access to healthy flour that can be used for porridge, pancakes, Ugali, cakes, bread and so many other products. I am impressed by the Mt. Kenya Community Foundation Youth Group based in Kathera, they have gone ahead and created employment for our youths after they came up with products such as mats, earrings, necklaces, paintings and other wall hangings. It is evident that banana farming has allowed creativity to thrive and be a source of income for the people of Meru,” Dionesia said.

“Meru is currently producing an average of 30kgs per bunch, but the Governor recognizes there is potential to grow that to minimum of 60kgs per bunch, hence has directed that officers do capacity building, during which farmers have and continue to be taught how to increase productivity, how to curb pest infestations and such like challenges. This exercise is projected to drastically increase the number of kilos each farmer gets from one bunch of bananas, and with that, comes more money earned.” Martin Munene, the chair person CTAC.

Chief of Staff Gideon Kimathi, who has last week paid a courtesy visit to stakeholders in the sub sector said the Governor is committed to help farmers reach their optimum potential and that a Banana Winery under construction will soon be complete upon which production of wine will commence immediately.

Several farmers and business proprietors’ including ICOBO Health Foods, the Mt. Kenya Community Foundation Youth Group and Wendo Foods, showcased their products expounding that products they derived from the bananas are nutritious, gluten free, easily digestible, and are rich in potassium, magnesium, Vitamin B and Amino acids.

The Chief of Staff also urged the stakeholders present to share ideas and learn from one another, as unity will see them grow much quicker than while divided.

“Going by last year’s Meru’s income, Sh6 billion came from banana production and we have potential to outdo ourselves. The government is therefore committed to continue working closely with the National Government and bring in partners such as the World Bank and many more, in order to add on to the allocated amount from the County Government kitty, in order to help grow the industry and by extension, go as far as provide quality seedlings to interested farmers.” Kimathi said.

He noted “We want the banana value addition chain to grow; much like with macadamia, avocados, sweet potatoes, Irish potatoes and fish. Our farmers will surely earn more money.”

The ban was enforced