This is paid on the profit investors make after excluding initial costs.

•The higher tax comes on the wake of increased home prices in Nairobi and land costs in satellite towns around the capital. 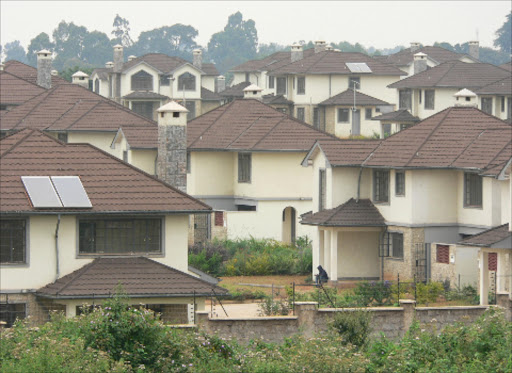 ON SALE: Developed houses at EdenVille Estate in Kiambu.

If you’re looking to dispose of part of your property this year you will have to contend with a rise in the amount of tax you will pay from your profits.

The government tripled the tax resulting from gains through sale of land, houses and unquoted shares to 15 percent from the five percent.

The tax that came to effect on Monday, January 2, is expected to hit Kenya’s real estate investments and private equity deals.

Edna Gitachu the associate director and the tax policy lead at PwC Kenya says a lot of people are likely to start re-thinking their disposal transactions because of the increased rate.

“This will likely create a liquidity gap in the market because a lot of people may not want to dispose of the property because of this tax,” said Gitachu.

The tax is paid on the profit investors make after excluding costs associated with the property such as upgrade, legal fees and mortgage interests and not the value of the asset itself.

The higher tax comes in the wake of increased home prices in Nairobi and land costs in satellite towns around the capital, which have risen to new highs on the back of renewed demand from buyers.

Data from the National Treasury shows that it collected Sh16.7 billion from capital gains tax in the year to June 2022, and hopes that the figure will increase this year.

This, according experts to will lead to reduced income by people selling land, buildings and company shares outside the Nairobi Securities Exchange (NSE), as well as intangible assets such as software and business goodwill.

Richard Ngari, tax lawyer and managing partner at Richard Ngari & Co advocates says whereas the increase is likely to hit property and share sales acquired after 2015 hard, it is still below other East African countries such as Rwanda which is at 30 per cent.

“While the government is really working to increase its tax revenues, the question of expansion of the tax base by increasing the number of registered and paying tax payers remains the elephant in the room,” says Ngari.

He points out that the state must come up with means of netting more tax payers into the tax bracket.

Treasury has previously said some countries, including East African neighbours, had much higher rates of capital gains tax at 20-30 per cent.

However, Gitachu says the neighbouring countries have higher rates because they have been excluded from taxes associated with inflation rise.

It said the land had been irregularly, illegally and unlawfully alienated to favour private individuals
News
1 month ago

Acacia trees, papyrus and other plant trees have been cut down, damaging the ecosystem
News
1 month ago

Herders in Tsavo have been agitating for permission to graze their animals in the park during drought
Counties
1 month ago
Post a comment
WATCH: The latest videos from the Star
by JACKTONE LAWI
Kenya
05 January 2023 - 04:00
Read The E-Paper