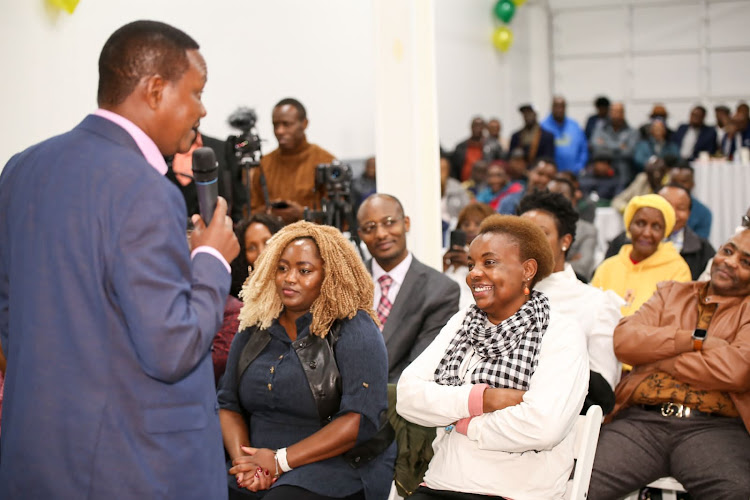 Foreign and diaspora affairs CS Alfred Mutua while in Seattle, Washington addressing Kenyans living in the US at an event organized by the North West Kenyan Association in the United States.
Image: COURTESY

Kenya is among Africa's top three recipients of diaspora remittances behind Nigeria and Ghana, according to a World Bank report.

Even so, Africa recorded the slowest growth in diaspora remittances compared to other continents in 2022, according to the bank's latest Migration and Development Brief.

Senegal and Zimbabwe have collected $2.7 billion and $2 billion respectively (Sh245.4 billion), closing among the top five nations in the region.

Diaspora remittances continues to be the leading forex earner for Kenya for the fourth year running after outpacing tea, coffee and tourism.

Remitting from countries in the least expensive corridors is on average 3.4 per cent compared to 25.2per cent for the costliest corridors.

"However, the burden of compliance with Anti-Money Laundering/Combating the Financing of Terrorism regulations continues to restrict access of new service providers to correspondent banks," the lender says.

World Bank says that remittances to Sub-Saharan Africa, the region most highly exposed to the effects of the global crisis, grew an estimated 5.2 per cent to $53 billion in 2022, compared with 16.4 per cent last year.

The growth, though three times lower compared to the previous year is mainly due to strong flows to Nigeria and Kenya.

"Remittances in 2023 are projected to soften to 3.9 per cent growth as adverse conditions in the global environment and regional source countries persist,''World Bank says.

The report shows remittances to low and middle-income countries (LMICs) withstood global headwinds in 2022, growing an estimated five per cent to $626 billion.

"Africa stands to be the most severely exposed to the concurrent crises, including severe drought and spikes in global energy and food commodity prices".

Remittance flows are estimated to have increased 10.3 per cent to Europe and Central Asia, where rising oil prices and demand for migrant workers in Russia supported remittances, in addition to the currency valuation effect.

The Migration and Development Brief analyses trends in migration-related SDG indicators: increasing the volume of remittances as a percentage of GDP, reducing remittance costs, and reducing recruitment costs.

Celebrating the contributions of Kenyans in the diaspora

This outweighs gains made in tea, horticulture exports.
Business
2 months ago