•They have been slowed down by elections in both countries. 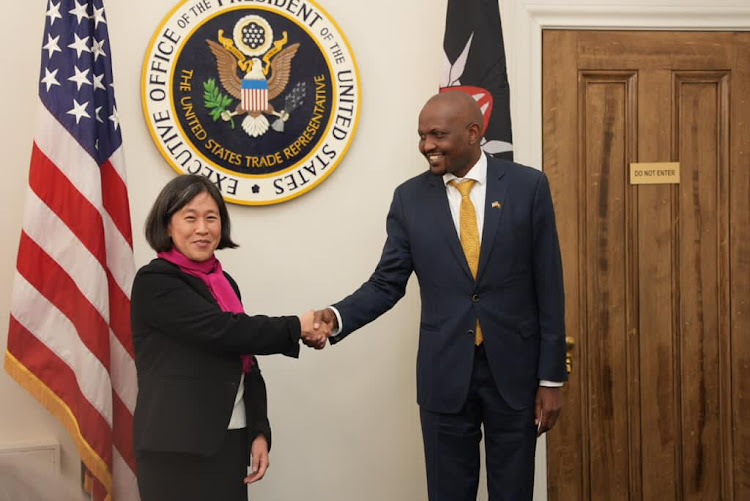 Trade talks between Kenya and the US are back on track with full resumption of  in-person meetings after a six-month break following Kenya' s elections and change of administration.

Expanding bilateral trade, inclusion of women and youth and supporting Micro, Small and Medium Enterprises will form the initial stages of the resumed talks under the Ruto administration.

The last physical meeting was in mid June when the US Trade Representative Katherine Tai and former Industrialisation and Trade  Trade Cabinet Secretary Betty Maina, met on the sidelines of the WTO Ministerial Conference in Geneva.

President William Ruto who is leading a delegation to the US-Africa Leaders Summit in Washington is keen to have the deal expedited, as he seeks more trade deals with the US.

On Tuesday, Investments, Trade and Industry Moses Kuria had the first in-person meeting with Tai and her deputy Ambassador Sarah Bianchi.

In a joint statement on Tuesday, the two sides said the initiative aligns with the Ruto administration’s domestic objective of greater economic inclusiveness.

"We discussed on plans to begin expert engagements on issues we had earlier identified during our virtual meeting,”Kuria said, which will also include advancing the African Continental Free Trade integration.

This now sets the stage for a full resumption of the talks which have been disrupted twice by elections.

This however stalled this year when Kenya went into an election.

In what would be a sign of goodwill by Biden to push for more trade collaboration with Kenya, the US President sent Tai to lead the country’s delegation to Ruto’s inauguration on September 13.

This was followed by two key visits by delegations from the US at State House Nairobi, before Ruto headed to the Washington summit.

Biden is hosting leaders from Africa between December 13-15, a forum the US is keen to use to strengthen its partnership with Africa.

Kenya, however is keen to secure a preferential trade agreement before the African Growth and Opportunity Act (AGOA) lapses in 2025.

According to trade experts, it takes up to two years to have a complete FTA (Free Trade Agreement) meaning the two countries could have a deal by 2024.

The AGOA program gives Kenya and 40 other sub-Saharan African countries duty-free access to the US market for over 6,000 products.

But European allies perceive it as anti-competitive and a threat to European jobs, especially in the energy and auto sectors.
News
1 month ago

Trade ministers held virtual meeting on Friday ahead of US summit.
Business
2 months ago
Post a comment
WATCH: The latest videos from the Star
by MARTIN MWITA Business Writer
Kenya
13 December 2022 - 16:00
Read The E-Paper