KAM roots for intellectual property use to fight counterfeits

This will help in getting database information on goods imported into the country.

•Rights owners will be provided with the opportunity to record their registered products.

•Illicit trade is estimated to cost the country an estimated Sh153 billion a year in lost taxes. 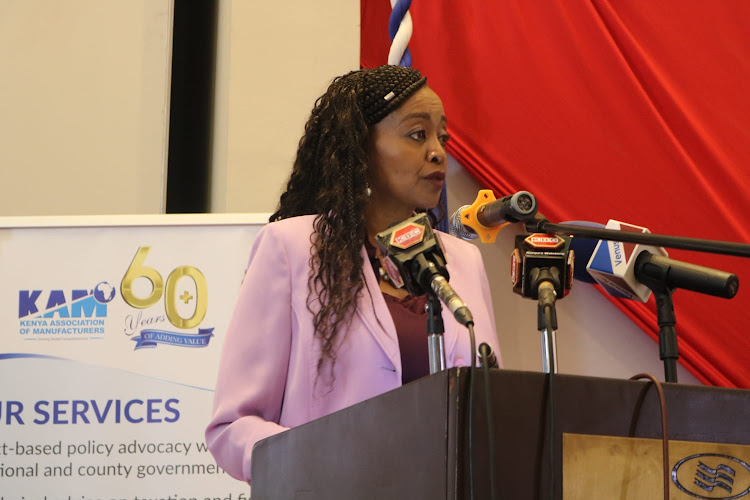 Flora Mutahi the chairperson Board of directors at Anti Counterfeit Authority during the launch of Intellectual Property Rights (IPR) Recordation.
Image: SHARON MAOMBO

Manufactures have been urged to support the documentation of Intellectual Property Rights (IPR) to help sustain the fight against counterfeiting.

According to the Kenya Association of Manufacturers, the process to be undertaken by the Anti-Counterfeit Authority will contribute to the overall growth and development of the manufacturing sector.

Speaking at a media briefing on the implementation of the IPR documentation regulations,  KAM chief executive officer Anthony Mwangi said that illicit hurts legitimate traders and impacts negatively on a free and open market.

“There is need for the government to promote the protection and enforcement of intellectual property rights as a way of encouraging innovativeness, research and development,” Mwangi said.

He said the anti-counterfeit body should embrace technology-backed smart systems that will offer a vast pool of intelligence information for better targeting and enforcement.

ACA’s chairperson, Flora Mutahi, noted that the government has made strides to fight trade in counterfeits and is working with different agencies to continue with the fight and other related forms of illicit trade.

She said they will use the IPR  programme which calls for creation of a database information relating to trademarks, copyrights and trade names for all goods to be imported into the country.

Illicit trade is estimated to cost the country an estimated Sh153 billion a year in lost taxes.

According to ACA trade in counterfeits robs the state of resources needed for vital services, while the monies go to fund criminal enterprises, breeds corruption and finances extremism across the region.

Most dealings in excisable goods are reported to be in alcoholic drinks and cigarettes both from international markets and neighbouring countries, mainly Uganda.

However, local manufactures and retailers have previously blamed high taxation in Kenya for attracting cheaper imports and smuggling from neighbouring countries.

In September, KAM warned agains an increase in excise taxes saying this would lead to a rise in the consumption of illicit goods, amid reduced production which would deny the government revenue.

The taxman has been counting on the Excisable Goods Management System (EGMS) to seal tax loopholes in excisable goods, which helped increase taxes from alcoholic drinks and cigarettes when it was first implemented in 2013.

This was from Sh700 million to above Sh5.6 billion annually.

In the first quarter of this year, Kenya Revenue Authority (KRA) rolled out a new generation of excise stamps to curb counterfeiting and seal revenue leaks.

For the first time in history, the annual revenue collection hit and surpassed the two trillion mark in the last financial year ended July, defying the difficult economic environment brought about by Covid-19.

KRA Sh2.031 trillion against an original target of Sh1.882 trillion and two other upward revenue target revisions of Sh1.911 trillion, which was later revised to Sh1.976 trillion.

Uganda and China among leading sources.
Business
5 months ago