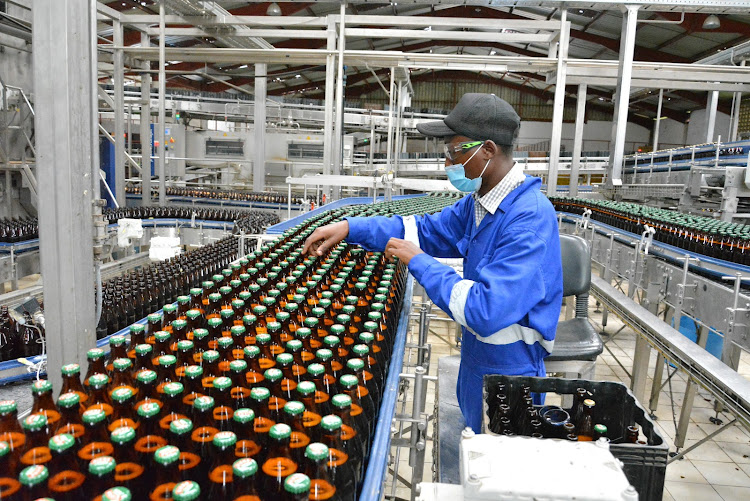 Keroche A plant operator at Naivasha based Keroche Breweries supervises the production of beer before the factory was closed down by KRA last month.
Image: George Murage

The Kenya Revenue Authority (KRA) has accused  Keroche Breweries of failing to honour tax payment agreements which informed the reopening of the brewer in July.

In a court application, the taxman says the brewery has failed to make payments as agreed prior to reopening on July 29.

“Keroche Breweries Limited has been adamant in disregarding the court order of July 14,” KRA’s application to the court read.

The taxman decried that despite issuing letters demanding the payment of the taxes from Keroche on July 21, August 3, August 15, and August 24, the brewer has failed to comply with the order and pay any taxes as ordered or when they fall due.

“Keroche Breweries Limited has now proceeded to decline to comply with their obligations under tax law and due dates to accounting for tax being the end of the month,'' KRA says in a fresh court petition.

The revenue agency added that it is unable to enforce the taxes while the brewer collects taxes from consumers and fails to remit the same,” said the taxman

KRA urged the court to address the case on a priority basis; or otherwise, the Respondent(Keroche) will continue to deliberately ignore the orders of the court.

'The firm has jeopardized our efforts to collect taxes when they become due and payable,'' KRA says.

It has further added that if the orders sought in the application are not granted, the taxman risks suffering actual and imminent revenue losses and further may be cited for contempt itself.

Early this year, KRA disclosed that the troubled brewery owes it Sh22.79 billion in unpaid taxes.

The taxman in an unprecedented move offered a blow-by-blow account of the 16-year-long battle with Keroche, including details of unpaid corporate tax, excise duty, VAT and penalties of Sh3.02 billion.

The tax dispute saw the revenue agency close the Naivasha-based firm in June on claims it had defaulted on their earlier agreement on the settlement of tax arrears.

In June, KRA closed down the factory over tax arrears.
News
2 months ago

The firm noted that the tax agency had failed to honour the said orders.
News
2 months ago

KRA in court to stop reopening of Keroche order

On July 15,  the High Court ordered KRA to open the Naivasha-based plant.
Business
2 months ago

KRA will sell the properties through public auctions or private treaty within two months of notifying the taxpayer.
Business
2 months ago
Post a comment
WATCH: The latest videos from the Star
by VICTOR AMADALA Business Writer
Kenya
02 September 2022 - 15:14
Read The E-Paper