The platform that will ease trade in the continent will create the world's largest free trade area with the potential to unite more than 1.2 billion people

•The AfCFTA provides the opportunity for Africa to create the world's largest free trade area with the potential to unite more than 1.2 billion people in an economic bloc.

•With a gross domestic product valued at least $2.5 trillion and usher in a new era of development. 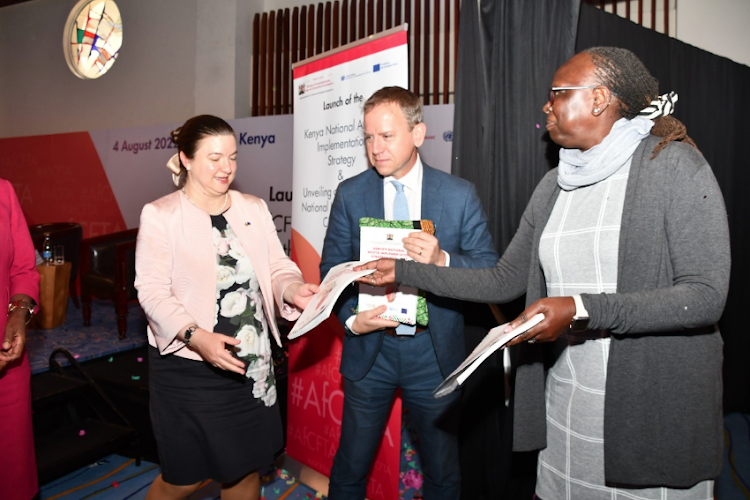 Kenya has launched it's national implementation strategy after being picked among among seven countries selected to start trading under the new Africa trade  framework.

The country has launched a digital platform aimed at easing trade under the African Continental Free Trade Area (AfCFTA).

The strategy identifies priority export products and sectors for goods and services aligned with Kenya's national development goals and aspirations.

These include the Integrated National Export Development and Promotion Strategy (INEDPS) and the Big Four Agenda.

The platform dubbed "The AfCFTA Hub" will connect national government, intergovernmental, private, and public digital and partnership platforms to  simplify the pathway for SMEs and startups to drive the success of the AfCFTA.

It fosters the digitisation of customs and other procedures by smoothing the paths for digital certificates of origin used in different countries to be interchangeable while allowing goods carriers in one national market to seamlessly handover shipments to their counterparts in other markets.

“It is important to ensure the centrality of SMEs, startups and female entrepreneurs as we strive to build the world’s most inclusive, most innovative and most integrated Single Market,” said Wamkele Mene, secretary general AfCFTA.

As a single window and a one-stop shop mechanism for regulatory coordination, plans are also underway for the platform to address the fragmentation of product registration and other processes hindering market integration.

The hub is designed to grow into a single, trusted directory of the services needed to navigate the AfCFTA for small players, thereby making the AfCFTA the most inclusive Free Trade Area in the world.

The platform also powers the “AfCFTA Number”, a trusted identity and social score for all SMEs, startups and other AfCFTA players.

Zambia, Namibia, Malawi and Ghana are in advanced implementation stages of both the AfCFTA guided pilot and AfCFTA Hub platform implementation.

Experts are of the view that without such digital coordination across countries it would take much longer for the benefits of AfCFTA to be realised across the continent.

EAC rules of origin also said to be more restrictive.
Business
1 month ago

AFCTA representatives have agreed on only 87 per cent of rules of origin for all products covered by the trade area.
Business
3 months ago

World Bank estimated the new market, created under the AfCFTA to be as large as 1.3 billion people across Africa.
Business
5 months ago

About 230 million jobs in Africa will require some level of digital skills by 2030.
Business
2 months ago
Post a comment
WATCH: The latest videos from the Star
by BY OLIVIA ADHIAMBO
Kenya
11 August 2022 - 19:00
Read The E-Paper