•The ministry targets to have at least 1,027,151 international arrivals this year.

•Earnings are projected to increase to Sh172.9 billion, up from Sh146.5 billion last year. 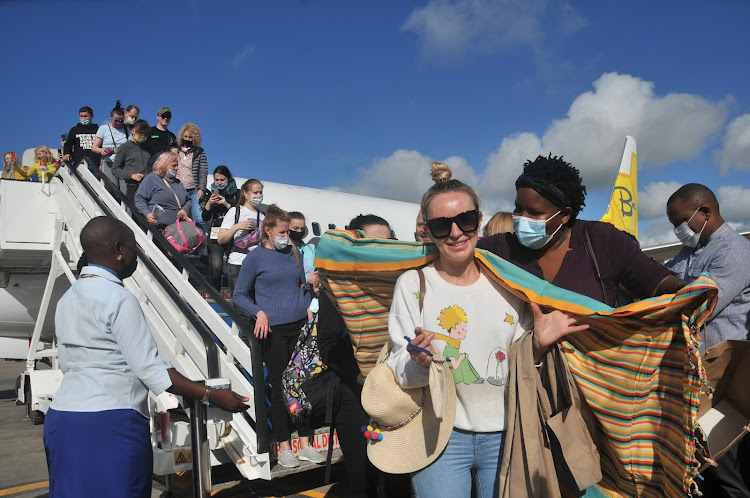 International arrivals to Kenya are projected to recover by up to 75 per cent this year as the tourism sector shakes off the impact of the Covid-19 pandemic.

This is after a strong performance in the first half of the year, where foreign visitors more than doubled to above 430,000, compared to the 222,765 visitors who came into the country in the same period last year.

Tourism and Wildife CS Najib Balala yesterday said with the high season that starts in July into August, total arrivals are expected to surpass last year’s.

The ministry targets to have at least 1,027,151 international arrivals this year with earnings expected to increase to Sh172.9 billion, up from Sh146.5 billion last year.

Kenya National Bureau of Statistics data shows the number of visitor arrivals through JKIA and Moi International Airport increased significantly to 225,321 in the first quarter of the year.

“The sector continued with its upward trajectory after relaxation of the Covid-19 measures,” KNBS says in its latest quarterly report.

In the first four months (January-April), total arrivals were 305,923 which is more than double the 152, 624 arrivals in the same period last year, Central Bank of Kenya data shows.

Speaking in Nairobi, during the second Honorary Warden Conference, CS Balala said the hotel and travel industry was experiencing a boom.

He noted that hotels in the Maasai Mara, for instance, are fully booked for the next two months as tourists throng the park for the annual wildebeest migration.

The movement of animals between Serengeti and the Maasai Mara, across the Mara River, usually occurs around late July to August and stretches to parts of September.

Their return south is normally around the last two weeks of October through early November.

“This year will definitely be better than last year. Maasai Mara is open all year round and visitors will have excellent experiences even outside the migration season,” Kenya Association of Hotel Keepers Caterers (KAHC) chief executive Mike Macharia yesterday said.

While the domestic market continues to play a critical role in supporting the industry over the pandemic period and post-Covid, Kenya has launched a charm-offensive in existing and new markets.

At least 10 markets have been identified for more marketing, which the ministry says are not fully tapped despite their potential.

“The sector is doing vey well ….2023-2024 will be a full recovery of our 2019 numbers but in terms of earnings, we have already seen this year tourism revenues will surpass 2019,” Balala said.

With the high season which starts in July picking, tourists numbers are expected to be higher in the second half of the year.

The best year so far remains 2019 when the country recorded an all-time high arrival of 2.2 million international visitors, with revenues totaling Sh163.6 billion.

The CS has expressed confidence the sector will remain strong even as the country heads into the general elections in less than two weeks.

The region has seen an increased number of tourists, both local and international flocking the island
Counties
4 months ago

Most of them are in Europe.
Business
10 months ago
WATCH: The biggest news in African Business
Post a comment
WATCH: The latest videos from the Star
by MARTIN MWITA Business Writer
Kenya
28 July 2022 - 04:00
Read The E-Paper