When optimally placed, the 12V powered MTego has an attractive range of 100 square metres. 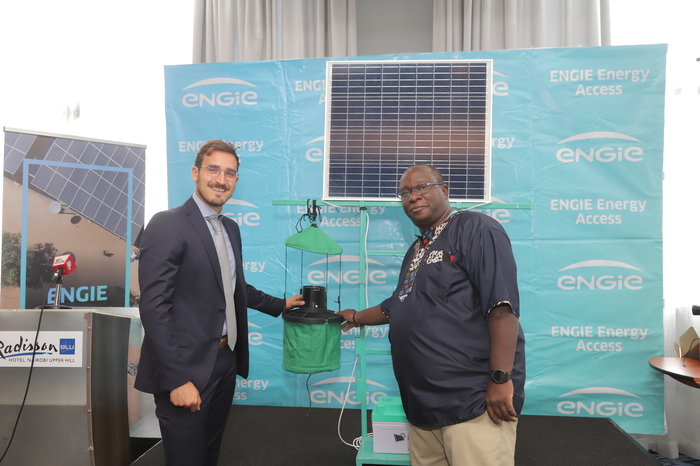 Malaria-causing mosquitos will be captured before getting into houses in an effort to eradicate the disease that kills thousands of people in Kenya every year.

This, after Engie Energy Access and Premal partnered to launch a solar-powered trapping system dubbed ‘MTego’ in the country. No insecticide is used in the process.

According to Engie Energy Access country’s director Fredrick Noballa, the new vector control technology is affordable, leverages clean energy and is a game-changer for livelihoods in rural areas.

The odour baited trap replicates human characteristics to attract mosquitoes and the technology employs a counter-airflow principle which uses an electric fan to create suction and emit a plume of odour.

The Mosquitoes follow the odour plume to the source and on approach, are sucked into a catch-pot and killed by dehydration.

When optimally placed, the 12V-powered MTego has an attractive range of 100 square metres.

“Malaria causes an enormous drain on African economies, with countries spending huge sums of resources for the control of malaria. These resources could instead be devoted to other productive sectors,” Noballa said.

Data by World Health Organisation (WHO) estimates 241 million malaria cases that are reported every year worldwide. Out of the estimate, 627,000 are said to relate to deaths.

Africa accounts for a high share of the global malaria burden with malaria cases at 95 per cent and malaria deaths at 96 per cent.

Cases relating to children under the age of 5 are said to account for about 80 per cent of all malaria deaths in the region.

PreMal's co-founder Lorenzo Fiori noted that the components of the odour pose no harm to humans.

“The odour is based on components present in human sweat and is highly attractive to all human-biting mosquitoes but imperceptible to human beings," Fiori said.

WHO, Gavi have rolled-out malaria vaccine funding in Africa

A child dies from malaria every minute in Africa.
News
2 weeks ago

He called for more investments in innovations to deal with current and emerging health concerns.
News
1 month ago

Kenya among countries that pledged billions to malaria war

Malaria and NTD-affected countries committed over Sh259 billion to ending the diseases.
News
1 month ago
by ALFRED ONYANGO
Kenya
24 July 2022 - 21:00