IPPs revealed in May they were yet to receive invitations for talks on cutting power prices.

•CS Monica Juma during an expo involving energy sector stakeholders failed to mention progress of the second cut as she highlighted major developments undergoing in the sector.

•IPPs revealed in May they were yet to receive invitations for talks on cutting power prices. 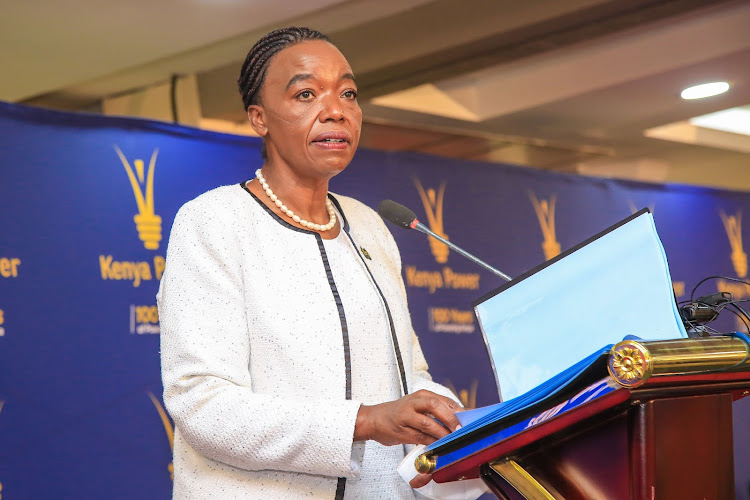 ENERGY Energy CS Monica Juma during the launch of the Manufacturers, Technology and Innovation Expo, kicked off at the Kenyatta International Convention Center (KICC) on Tuesday.
Image: Handout

Power consumers will wait longer to benefit for the final phase of the 15 per cent cut on electricity power bills following delays in talks with Independent Power Producers (IPPS).

Speaking at an energy expo in Nairobi, Energy Cabinet Secretary Monica Juma failed to mention progress of the second review but focussed on highlighting undergoing developments in the sector.

In May, IPPs  said they were yet to receive invitation for talks on cutting wholesale power prices that would ultimately lead to lower consumer bills.

Implementation of the second 15 per cent power cut was initially set for end of March but was pushed to end of June after negotiations between the government and IPPs stalled.

Commercial and Industrial (CI1) category consumers who use at least 15,000 units monthly are still complaining of costly tariffs despite the first cut that reduced electricity bills from Sh12 to Sh8.7 per unit.

With the current 15 per cent reduction, domestic and small scale users consuming between 100 and 1,500 units are currently paying Sh12.60 per unit while small commercial users consuming more than 100 units pay Sh7.7 per unit.

"That matter is in the hands of the Cabinet secretary, it is not a Kenya power matter alone, the whole sector has a role to play," Muli said.

The government is yet to provide a budget for the second cut after offering Kenya Power a Sh7 billion subsidy that allowed the firm to cut retail tariffs by 15 percent in January.

The State promised a similar cut based on the review of Power Purchase Agreements (PPAs) after a presidential task force established a huge disparity between the tariffs charged by main power producer KenGen and private power generators.

“The Ministry of Energy remains steadfast in its resolve to drive these irreversible reforms and calls upon all stakeholders, particularly the IPPS to reciprocate the Government’s demonstrated good faith as we finalize the negotiation process,” the Energy ministry is quoted saying in the past.

At the expo, Juma said the government is committed to ensure provision of clean, affordable and sustainable energy to power the country’s growth.

“We have made very strong international commitments and taken deliberate steps to have the energy sector achieve carbon neutral status by sourcing electricity solely from clean two sources by year 2030 in alignment with SDG 7 which advocates for the provision of clean energy for all,” the CS said.

She said Kenya must take advantage of technology to improve on the country’s grid and create access to low cost power.

Juma said Africa is experiencing energy pressure due to the ongoing war in Ukraine, hence the  need to for other sources of sustainable energy security.

This, she said, will be achieved by relying on innovative ideas and technologies, including green hydrogen energy, whose feasibility studies are ongoing in Kenya.

It, however, is unclear how, if at all, users of pre-paid tokens will benefit from the December cut.
News
8 months ago
by SHARON MAOMBO Business Writer
Kenya
07 July 2022 - 05:00
Read The E-Paper