Kenya’s elections not a problem to tourism, travelers assured

•Most hotels at the coast currently doing between 50-60% occupancy. 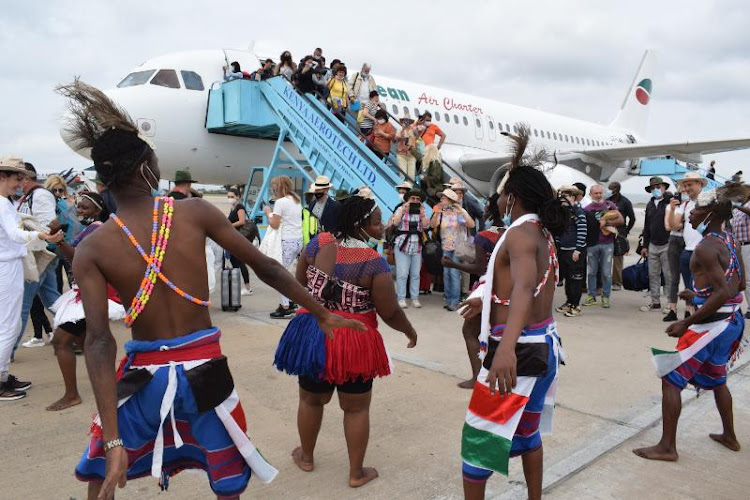 Tourists on board a Bulgarian charter flight are received in Mombasa/
Image: KTB

The current political campaigns and the upcoming August General Elections in Kenya are not a problem to the tourism industry, sector players have said.

They have encouraged both the international and domestic tourists to continue with their travel plans into and across the country, noting the sector is stable.

Low disposable income by households occasioned with the high cost of living however remains a concern for the sector, where spending on leisure has been affected.

This is on good planning of the election shown by the Independent Electoral and Boundaries Commission (IEBC), they say, which has given the tourism industry confidence.

Leisure tourism, which the biggest segment however remains affected by high inflation in economies across the globe and geo-political factors mainly the Russia-Ukraine war.

“The sector is okay in regards to the elections period but the main issue is the high cost of living, Covid which has affected travel and geopolitical factors that have affected travel from key markets,” tourism KAHC executive officer Sam Ikwaye told the Star on the telephone.

He noted that most hotels at the coast and parks are currently averaging 50-60 per cent occupancy.

Veteran hotelier, Mohamed Hersi, who is also the Group Director of Operations at Kenya's leading tour operator, Pollman's  Tours and Safaris, noted facilities in Nairobi are currently busy despite being an electioneering period, signaling the country is stable.

“I must commend Kenyans, we are mature politically and we want to re-assure the world that Kenya is peaceful. In the past people would leave the country during elections but we are past that. We are confident the industry will remain stable,” Hersi said.

The major concern for Kenyans and other economies, he noted, is the rising cost of living, which can be addressed through subsidies.

“Stop spending millions on peace caravans, Kenya is very peaceful. Instead, use those funds to cushion households through subsidies mainly basic goods such as maize and cooking oil. What Kenyans are yarning for is affordable cost of living,” he said.

Kenya Coast Tourism Association (KCTA) chief executive, Julius Owino, said: “Elections always brings jitters and disruption on business environment however it is important to note that 40 days to election, the political engagements have so far been peaceful and non disruptive.”

He has attributed this to strong institutions and respect for constitution.

“We have also watched main political protagonist embark on issue based campaigns with less rhetoric than before, the battle is about the economic models which is a total change of narrative. As tourism stakeholders we continue to call for peaceful political engagement,” he said.

He noted the industry is stable with hotels at the cost currently averaging 50-60 per cent occupancy.

Meanwhile, the industry players have called on the government to allow more airlines to operate directly to Mombasa, with the coast region remaining a leading beach destination.

In a move to try and cushion national carrier-Kenya Airways from competition, the government has reduced frequencies for some airlines, with some yet to get approvals after temporary suspension of operations at the height of the Covid-19 pandemic.

For instance, Turkish Airlines is keen to fly five times a week to Mombasa, which was the case before the pandemic.

It also had seven flights to Nairobi making the total 12. This has been reduced to seven which has seen it prioritise Nairobi over Mombasa.

Other airlines keen to cement operations to Mombasa include KLM, Emirates and Qatar.

“We understand the government is trying to protect KQ but if they don’t have enough planes, let others fly. Lets embrace the open skies policy,” Hersi said, noting the move will create more connectivity, bringing in more tourists into the country.

Both KAHC and KCTA are also in support of the policy saying it will make Mombasa more attractive.

“Currently we are facing competition from the likes of Zanzibar where tourists are flying diurectly from Europe. Give landing rights to other airlines and make the destination attractive,” Okwaye said.

Owino on the other hand said: “The international numbers is much affected by connectivity remember Qatar and Turkish are out since their landing rights have not been renewed.”

The transport ministry is said to be considering the request to allow more flights to Mombasa.

Meanwhile, Kenya is eyeing at least 10 international markets which it believes are yet to be fully tapped, as it plots a string post-Covid recovery with a strong tourism strategy launched last month.

The best year remains 2019 when the country recorded an all-time high arrival of 2.2 million international visitors.

“We are gong to focus on untapped markets with aggressive marketing campaigns. Some of the markets have previously not ranked very highly but have potential to grow tremendously as we pursue full recovery,” Tourism and Wildlife CS Najib Balala notes.

The ministry targets to have at least 1,027,151 international arrivals this year with earnings expected to increase to Sh172.9 billion, up from Sh146.5 billion last year.

Arrivals however increased 53.2% as earnings rose to Sh146bn
Business
6 months ago

The tourism ministry is banking on an increase in both international and domestic tourist arrivals
Business
2 months ago
Don't hurt tourism when protecting KQ
WATCH: The biggest news in African Business
by MARTIN MWITA Business Writer
Kenya
04 July 2022 - 04:00
Read The E-Paper