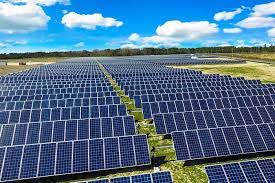 The Kesses Solar Project which is based in  Eldoret received Sh3.9 billion.
Image: COURTESY

The work will be undertaken by 14 private firms picked and funded by the state.

This is part of Kenya's partnership with the World Bank and SNV through the Kenya Off-grid Solar Access Project (KOSAP).

Kenya seeks to achieve a full transition to clean energy by the year 2030.

Renewable energy currently accounts for 73 per cent of Kenya's installed power generation capacity while 90 per cent of electricity in use is from green sources among them geothermal, wind, solar and hydro-electric installations.

The funding is meant to ensure the establishment of sustainable supply chains for the marketing and sale of Solar Home Systems (SHS) in the targeted areas in a drive to achieve universal access to electricity in 2026 in the country.

It is also expected to spur actors in the private sector to invest more in modern solar solutions and the provision of clean cooking solutions in counties that are not served by the national electricity grid.

This is the second phase of funding that will benefit semi arid counties including Garissa, Wajir, Mandera, Marsabit, Isiolo and West Pokot.

“Disbursement to the firms will be done in two phases, 50/50, under due diligence and accountability which will incentivise the firms on meeting sales targets,” KOSAP said.

This is done to ensure budget compliance among the firms having experienced vast challenges in the first component mainly funds misuse and unaccountability.

In the first phase, KOSAP allocated Sh500 million to 19 firms where 10 were standalone solar systems while nine were clean cooking component firms.

Energy Principal Secretary Gordon Kihalangwa said the initiative is a major milestone for KOSAP and appealed to the target residents to buy sustainable solar products in meeting their daily energy needs.

“I challenge the selected SSPs to leverage the funding to sell more units and build viable enterprises in the process since it's modelled to support private sector players to establish viable businesses in the targeted counties,” Kihalangwa said.

The firms were told to include women and minorities in their target groups. were also asked to champion the social safeguarding initiatives most importantly women's engagement and minority inclusion.

Growing concerns over the rise of solar e-waste

Solar panels have mercury which damages the brain when ingested in foods or water.
News
8 months ago

The cost of solar power has fallen by more than three quarters globally over the past decade.
News
9 months ago

As climate talks come to Africa, world must wake up to energy access challenge

Around 700 million people around the world lack access to electricity.
Opinion
10 months ago