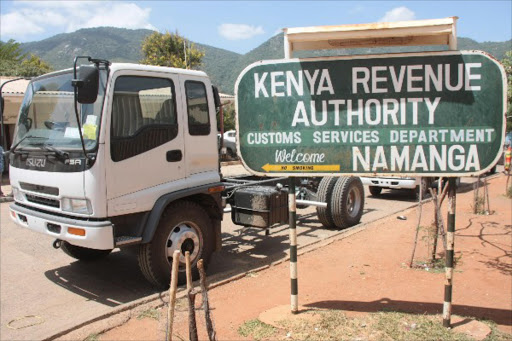 Entry POINT: A billboard gives direction to the Kenya Revenue Authority offices at the Kenya-Tanzania border of Namanga/FILE

There could be a looming shadow on improved Kenya-Tanzania bilateral trade following the recent hike in export permit fees by Samia Suluhu’s government from Sh27,000 per truck to Sh52,000.

This is a 93 per cent increase in representation which means that both the exporters and importers will have to dig deeper into their pockets to keep the trade flowing.

Last year, Kenya-Tanzania bilateral trade failed to hit $1 billion by a whisker, closing at $905.5 million (Sh101.8 billion) for the period between January and November, according to the Central Bank of Kenya (CBK).

Trade was for the first time in favour of Tanzania, with Kenya’s imports from her Southern neighbour standing at $501 million (Sh58.6 billion), and exports at $403.9 million (Sh47.3 billion).

Tanzania’s exports to Kenya grew by 95.3 percent, nearly double to Sh 54.47 billion compared to the previous year. On the other hand, Kenya’s exports to Tanzania jumped by 43.39 per cent.

This was attributed to bilateral talks initiated by the two leaders in May last year, with maize imports from Tanzania rising sixfold to 118,329 bags, less than a month after Suluhu's visit.

“We noted that trade between Kenya and Tanzania is facing some administrative challenges. They include non-barriers and other restrictions which are frustrating trade and investment between our two countries," President Kenyatta said.

The sudden rise which was the highest recorded figure since independence was also linked to the increased import of cereals, mostly rice and maize.

Kenya had in April banned maize imports from Tanzania and Uganda, citing a high level of aflatoxin beyond the required minimum of 10 parts per billion.

Prior to the visit, the representatives from the two countries had in March agreed to eliminate barriers hindering the smooth flow of trade and people.

Trade experts fear that a hike in export permit fees by Tanzania will likely reverse gains made, with Kenya likely to bear the highest brunt.

''The new directive is set to hit millers who are banking on the East African country for imports of maize to meet the current shortage in the country,'' trade unionist Trevor Ombeva told the Star yesterday.

He added that it is also likely to spark another round of trade war between Kenya and Tanzania slightly over a year after the two countries resolved their differences that had impacted negatively on cross-border trade.

The move caused a huge snarl-up of trucks moving to Kenya in the last week as traders and truckers were caught off guard by the new requirement.

“Tanzania has increased the charges that it levies on the export permit to Sh52, 000 per truck creating confusion at the border but activities are slowly coming back to normal,” said an officer of the Kenya Revenue Authority (KRA).

Even so, the Kenya Bureau of  Standards (Kebs) says that normalcy is resuming.

“We have now seen some movement of trucks from Tanzania to Kenya. We have carried out some samples of the goods getting into Kenya, meaning that the normal flow of trucks is slowly gaining momentum,” said a Kebs official.

The region continues to experience sibling rivalry even after regional heads resolved to eliminate all remaining Non-Tariff Barriers (NTBs) at the 18th Extraordinary Summit in December last year.

Millers to wait longer before importing wheat from India

This is due to a ban put after a fungal disease outbreak in the Asian country.
Business
2 months ago

Tanzanian Minister says interconnectivity crucial if continent is to exploit its vast potential for industrialisation
Business
2 months ago
by BY ALFRED ONYANGO
Kenya
29 June 2022 - 04:00
Read The E-Paper