•At least 7 MoUs expected to be signed during President Julius Maada Bio's visit.

•Trade has been in favour of Kenya, albeit low volumes. 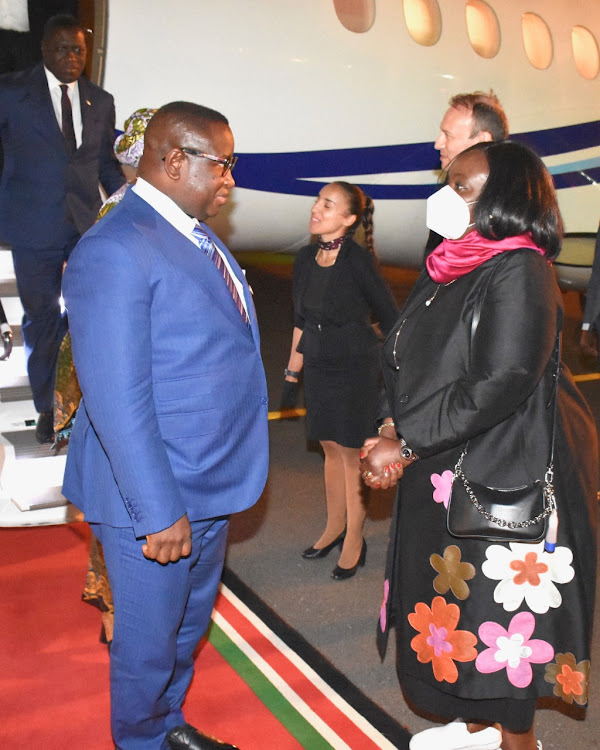 Kenya is today set to host a high-level round table business forum during the ongoing official visit of President Julius Maada Bio to the Eat African country.

Being an economic powerhouse in the region, the country has continued to play a pivotal role in the East African regional trade, with the Port of Mombasa playing a key maritime role of connecting the EAC (EST African Community) to the globe.

However more trade is with the East African neighbours, supported by trade instruments under the region’s common market.

While the value of exports to Africa increased to Sh309.3 billion, up from Sh246.1 billion the previous year, Sh192.4 billion of this was to the EACT market mainly Uganda (Sh91.6 billion), the Economic Survey 2022 by the Kenya National Bureau of Statistics (KNBS) indicates.

During the year, Kenya’s total value of international trade amounted to Sh2.894 trillion rising from Sh2.287 trillion in in 2020.

This was occasioned by a 30.9 per cent growth in imports together with a 15.5 per cent increase in total exports.

The increase in imports, which surpassed the increase in total exports, widened the trade deficit from Sh 999.9 billion in 2020 to Sh1.407 trillion.

“The growth was largely attributable to increases in domestic exports of horticulture; titanium ores and concentrates; and articles of apparel and clothing accessories,” KNBS notes in its survey, released last month.

The Republic of Sierra Leone is nowhere near Kenya’s key trading partners as volumes remain low.

However, the two countries have enjoyed good bilateral ties over years which are expected to be enhanced with President Bio’s visit.

Kenya is one of the African Union member states that contributed troops to the United Nations Mission in Sierra Leone (UNAMSIL) from 1995 to 2005.

UNAMSIL's mission was to stabilise Sierra Leone and implement the Lome Peace Agreement, with the mission ending in successfully in 2005.

President Bio is expected to be the chief guest during this year’s Madaraka Day celebrations, on Wednesday (June 1).

During his visit, he will hold talks with his host, President Uhuru Kenyatta, on bilateral relations.

At least seven Memorandum of Understanding (MoUs) are expected to be signed, further enhancing relations.

Among them is on peace and security and trade.

Kenya’s Industrilisation, Trade and Enterprise Development ministry will be leading the Kenyan business community in talks with their Sierra Leone counterparts, on trade and investment.

“The forum will serve as a platform for the business community to exchange views and develop proposals on measures that both countries can adopt with the view of increasing the overall trade between the two countries,” the ministry said in a statement on Monday, with the talk being held today (Tuesday, May 30).

What business opportunities are there?

Trade between both the two countries is considered to be minimal.

Kenya's main imports from Sierra Leone include ores and concentrates of base metals, bearings, furniture and parts of TV receivers.

Renewed ties and new MoUs are expected to open up more opportunities for the private sectors of the two countries, increasing trade and investments.

It also comes at an opportune time when the two countries are strategizing to benefit from the African Continental Free Trade Area (AfCFTA).

The two are among countries that have ratified the deal, which seeks to enhance intra-Africa trade, which is currently at a low of 15 per cent compared to common markets such as the EUwhich is at 67 per cent.

Removal of Non-Tarrif Barriers (NTBs) under the agreement is likely to boost trade between Kenya, the East African Community member states, and other parts trade blocs.

NTBs remain a major challenge on the movement of goods in regional trade blocs, and further across countries in the continent.

Trade within African countries could grow by up to $231 billion (Sh25.779 trillion) if a free trade area is promoted, according to a repot by Afreximbank.

The bank notes that that the African Continental Free Trade Area has the potential of opening the path towards formalisation of cross-border informal trade(ICBT).

According to the African multilateral trade finance institution, the export potential of intra-African trade remains untapped, currently at more than $84 billion (Sh9.8 trillion).

"The untapped proportion is based on sectors that have already proven to be internationally competitive and which have good prospects for export success in other African markets," the report by Afreximbank and United Nations Economic Commission for Africa (UNECA) states in part.

Products with the greatest export potential include minerals, machinery, food products, motor vehicles and parts, and plastics and rubber.

The untapped figure of $84 billion is overwhelmingly concentrated in Southern Africa, with $53 billion of the total.

He was received at the JKIA on Saturday night by Foreign Affairs CS Raychelle Omamo.
News
3 weeks ago

AfCFTA: Time to move into the fast lane

41 countries have deposited their instruments of ratification but not a single trade has occurred as a result of political disagreements.
Opinion
1 month ago
WATCH: The biggest news in African Business
by MARTIN MWITA Business Writer
Kenya
31 May 2022 - 04:00