Base secures fourth licence in TZ as Kenyan operations unclear

It started exploration activities in the neighbouring country last year.

•A government of Kenya moratorium on the issuance of prospecting licences in November 2019 has affected the progress of all licence applications. 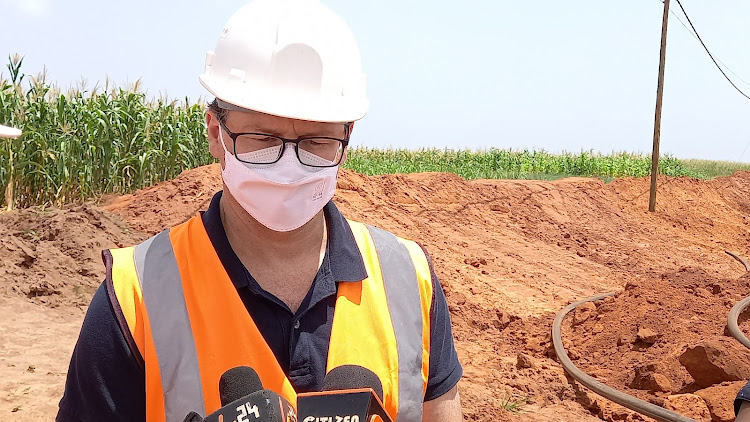 Base Titanium's General Manager External Affairs Simon Wall speaks to the media at one of the Kwale mine sites, in January 2022.
Image: SHABAN OMAR

Base Titanium has secured a fourth prospecting licence in Tanzania, increasing its potential investment decision in the neighbouring country as it continues to face delays in Kenya.

The additional licence was in the first quarter of this year and the company has already started on-ground exploration.

“During the quarter, an additional Tanzanian prospecting licence was granted, and sampling work commenced. Subject to the outcomes of assays, deeper drilling will be progressed utilising a recently acquired 15m auger rig,” the firm says in its latest operational update for Q1 2022.

It has so far spent about Sh34.8 million in exploration activities.

Its Kenyan operations on the other hand have been slowed down by delays in the issuance of licenses, following a government mineral prospecting moratorium in November 2019.

The firm which has been mining titanium ores in Kenya since 2013, with the first shipment in February 2014, is keen extend its operations beyond  2024, when its current mine-life is ends.

“The Company is finalising a DFS (definitive feasibility study) on the Bumamani and higher-grade subsets of the Kwale North Dune deposits, to seek to extend Kwale Operations’ mine life to late 2024. The DFS is on schedule for completion in the June quarter,” Base says.

It had earlier indicated it would exhaust the current licensed area by October this year, before getting a nod to increase activities which pushed the timelines to November 2023.

“An additional prospecting licence application has been lodged for the area surrounded by the Kuranze applications in Kenya, however application numbers and boundaries have not yet been issued,” the firm reports.

Work on the Vanga Prospecting Licence (PL/2015/0042) in Kwale also remained stuck in the quarter and completion of the remaining drill program (4,200 metres) in the North-East Sector (Kwale East) of PL 2018/0119 remains on hold pending land access being secured.

The firm which accounted for 65 per cent of Kenya's mineral exports in the past year increased its share, accounting for 84.8 per cent of Kenya’s total value of minerals produced last year, the Economic Survey 2021 indicates.

“There was a 33.0 per cent increase in the value of mineral production during the review period which was largely attributed to increase in value of output from Titanium ore mineral concentrates from Sh19.5 billion in 2020 to Sh25.6 billion in 2021,” the survey reads in part.

Total exports to China were valued at Sh21.9 billion, up from Sh14.8 billion in 2020, representing a 48.1 per cent increase, majorly attributable to an increase in domestic exports of titanium ores and concentrate to this destination.

The total value of minerals produced during the year under review increased by 33.0 per cent from Sh22.7 billion in 2020 to Sh30.2 billion, attributed to a 31.5 per cent increase in the value of the titanium ore minerals.

The company has however reported reduced trading activities in the first quarter of 2021 where sales were slightly lower compared to the the quarter ended December 2021, despite production remaining stable.

Total minerals sold (ilmenite, rutile and zircon) were 107, 700 tonnes compared to 147,800 produced in the previous quarter.

“We want to stay as much as we can but anything beyond 2024 needs prospecting licenses which will determine if we find additional minerals,” General Manager External Affairs, Simon Wall, had told the Star in an earlier telephone interview.

Base extends Kenyan operations to 2024

Hopeful it will get approvals for further expansion.
Business
3 months ago

Base Titanium hopeful of mining beyond 2022