Number of customers connected under Rural Electrification Programme grew to 1.9 million in 2020/21.

•Total number of customers connected to electricity in Kenya now above 8,278,203.

•More than 25% of Kenyans however yet to be connected. 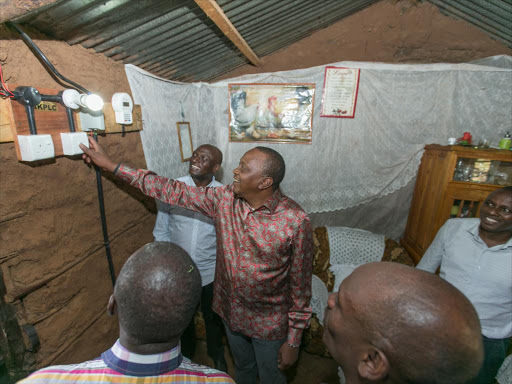 President Uhuru Kenyatta switches on power at a home in Kikuyu constituency which was connected under the last mile project/
Image: FILE

The number of customers connected to the national grid under the Rural Electrification Programme grew from 1.5 million in 2019/20 to 1.9 million in 2020/21, official government data shows.

This pushed the total number of customers connected to electricity in Kenya to above 8,278,203 that had been recorded as at the end of June 2021, as the government continued to drive its universal connectivity.

However as President Uhuru Kenyatta starts packing ahead of his expected exit from office in August, after serving the constitutional two five-year terms, the government is still short of its universal access to electricity target which it had set for the year 2020 before adjusting to 2022.

With a total population of 47.5 million;  households– 12.2 million ( Kenya National Bureau of Statistics 2019 census), a sizable number of Kenyans mainly in the rural parts of the country are yet to get connected, with the government's Last Mile Connectivity project facing a number of challenges among them procurement hitches.

According to KNBS data, although there are more electricity users in the rural areas at 7.3 million than the urban setting, where only 4.6 million are using electricity for lighting, the penetration rate is still lowest upcountry, with only 26 per cent connected compared to 88.4 per cent in the urban setting.

Kerosene for lighting in rural households is at 87 per cent.

Experts and social justice leaders have pointed out ability to afford the connection fee, high electricity bills and the cost of wiring home among the main challenges.

“When you get distribution up to 500 meters or 250 metres to your home, that is still expensive to bring power to the house. Electicity is also still unaffordable in the country due to a number of factors including the expensive IPPs (Independent Power Producers) contracts,” Energy activist Jerotich Seii told the Star yesterday.

Kenya however has the highest electricity access rate in East Africa according to the World Bank, with total access at 75 per cent both from grid and off-grid solutions.

This was a 170 per cent increase that has seen an additional 21.3 million Kenyans benefit from electricity access in just over four years compared to 12.8 million Kenyans over the previous 50 years.

“But there are a quarter of Kenyans still lack access to electricity,” World Bank notes in its recent according to the recent Multi-Tier Framework Energy Access Survey Report, “Universal access to electricity is a key requirement for meeting Kenya’s development goals under Vision 2030.”

The costly power bills have been pushing poor households mainly in slums to illegal connections.According to Kenya Power, there has been a rise in illegal connections, meter bypasses and faulty meters among others, which have contributed to increase in system losses.

“Notably, it is estimated that the Company loses about 80 per cent of expected revenue due to illegal connections in the informal settlements of Mathare, Mukuru and Kibera,” Kenya Power says its latest financial report.

Illegal electricity connections cause overloads on transformers which compromise the quality and reliability of power supply to legally connected customers, while posing safety concerns.

GOGLA, the global association for the off-grid solar energy industry had in 2019 warned the universal connectivity will not be achieved unless focus is given to off-grid.

“If we are talking about only grid extension, it won't happen," GOGLA East Africa regional representative, Patrick Tonui, had said.

However, electricity generated from hydro declined by 13.2 per cent to 3,675.0 GWh due to insufficient rains during the review period.

He said delay in achieving 100% connectivity was majorly brought about by pandemic.
News
7 months ago

This comes amid poor main grid electricity transmission network in rural areas which remain potential areas for off-grid solar and mini-grid ...
Business
2 years ago
WATCH: The biggest news in African Business
Post a comment
WATCH: The latest videos from the Star
by MARTIN MWITA Business Writer
Kenya
10 May 2022 - 04:00
Read The E-Paper